Borat Subsequent Moviefilm: Delivery of Prodigious Bribe to American Regime For Make Benefit Once Glorious Nation of Kazakhstan will stream on Amazon in October 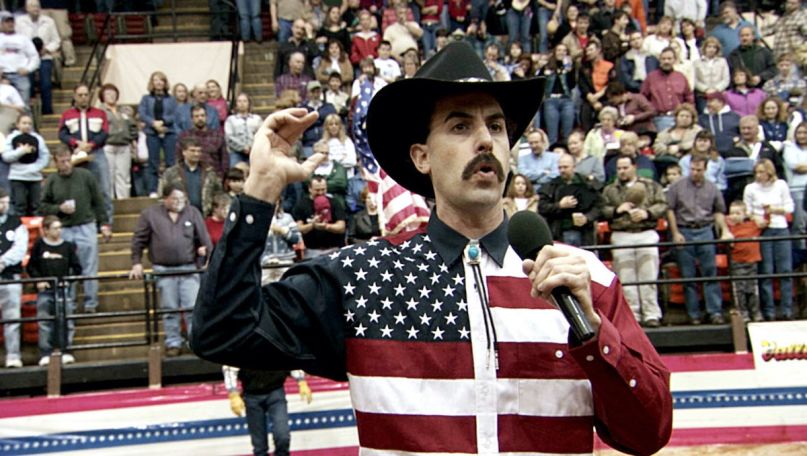 How’s this for an October surprise? Sacha Baron Cohen’s Borat sequel will be released ahead of the 2020 presidential election. The film will be streamed exclusively on Amazon Prime before the end of October, according to Deadline.

Update: Borat 2 will premiere October 23rd on Amazon Prime. The first trailer arrives on October 1st, but you can stream a teaser below.

Per Deadline, Borat 2 was one of the first films to go into production once shutdown restrictions were eased. Cohen and his team shot the film discretely in various parts of the U.S. and internationally.

As this point, the film’s plot remains a closely guarded secret, but we do have some clues to suggest he’ll be heavily targeting the GOP. Beyond the timing of its release and the reference to the Trump Administration in its title, Cohen was recently spotted infiltrating a far-right rally. He also had the cops called on him after attempting to prank Donald Trump’s crooked lawyer, Rudy Giuliani.

While filming Borat 2, Cohen also found himself in “risky and dangerous scenarios,” which required him to wear a bulletproof vest, Deadline reports.

Cohen was reportedly determined to release the film prior to the election, which is why he opted for the streaming route. If you don’t already have Amazon Prime, you can subscribe here.

Jagshemash my name Borat Sagdiyev, I like mouth party. Thank you Mr. Sacha Karen Cohen for let me usings your visual fax machine. Please you will look on this space tomorrow at 8.07pm Kazakhstan Time. Chenquieh pic.twitter.com/akdvw7vlTJ