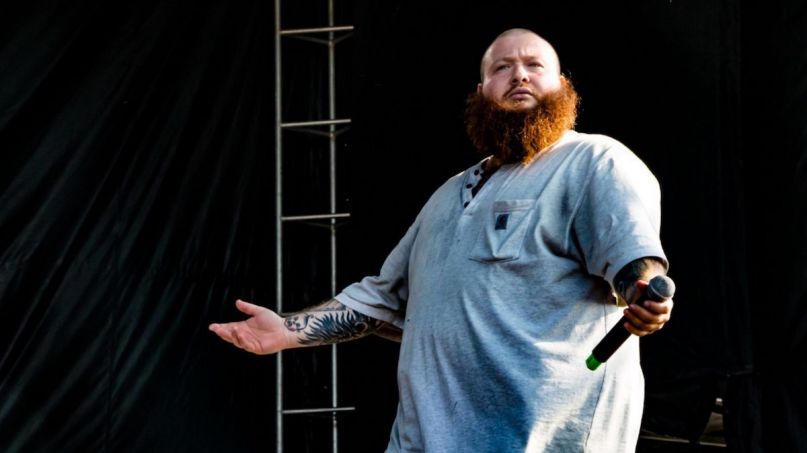 Action Bronson has announced a new album called Only For Dolphins. The record is due out later this month, but the Queens rapper is previewing the release with a new song called “Golden Eye”.

The follow-up to 2018’s White Bronco boasts guest bars from Meyhem Lauren, Hologram, and Yung Mehico, as well as production by The Alchemist, Harry Fraud, Daringer, Budgie, and DJ Muggs, among others. Bam Bam actually teased the album earlier this summer in the lyrics of his July single “Latin Grammys”, which happened to also feature not-so-subtle dolphin noises at the end of the track.

In a statement about the album, Bronson expressed his admiration for the aquatic creatures. “The dolphin is one of the most intelligent creatures ever created on whatever planet we’re on,” he said. “They have their own way of communicating. They have nuance and intangibles like we do.”

He then compared dolphins to “five-tool” baseball players, athletes that excel at all facets of the game, and confidently placed himself amongst their ranks. “The only people who understand me are those five-tool players,” continued Bronson, “those higher beings who are on the same telepathic wave as me.”

In today’s preview “Golden Eye”, there is plenty more dolphin chatter to be found, scattered over a classic dub instrumental. For his part, the hip-hop artist remains a terrestrial being, rapping about spilling Chardonnay on expensive rugs and “smoking drugs under the cherry tree.” Not exactly the James Bond lifestyle, but he sounds as relaxed and reliably smooth as ever. Check it out below.

Only For Dolphins is set to drop September 25th via Loma Vista and can be pre-ordered here. Recently, Bronson guested on Late Night with Seth Meyers and spoke about losing 80 pounds over quarantine.

*ONLY FOR DOLPHINS* SEPTEMBER 25th pic.twitter.com/omK2ghWtBz

Only For Dolphins Artwork: