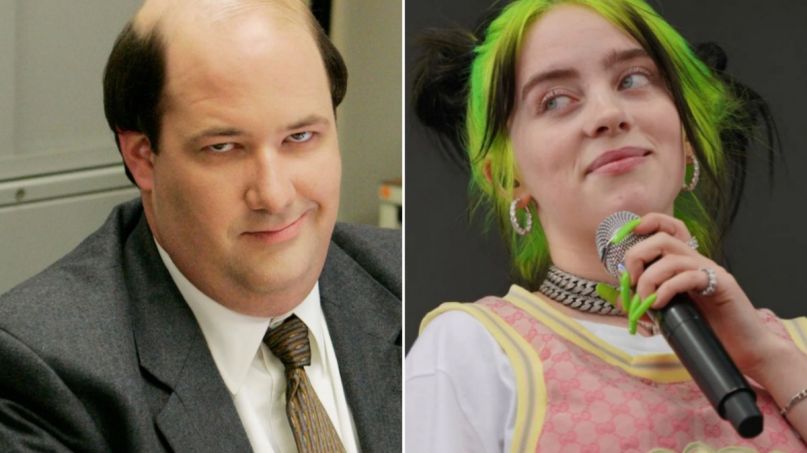 Earlier this summer, Brian Baumgartner, a.k.a. Kevin Malone, marked the 15th anniversary of The Office by launching a podcast on Spotify. Titled An Oral History of The Office, the 12-episode series is coming to a close today, and its finale features an appropriate send-off from one of the TV show’s biggest fans: Billie Eilish.

Our 2019 Artist of the Year has spoken extensively about her love for all things The Office, and was even “quizzed” on Office trivia by Mr. Beets, Bears, and Battlestar Galactica himself, Rainn Wilson. It’s no surprise, then, how giddy Eilish was to appear on An Oral History. “This is crazy!” gushed the pop megastar, who joined Baumgartner and Steve Carell  (Michael Scott) via FaceTime mere days after sweeping the Grammys.

In a discussion about its everlasting legacy, Eilish admitted to watching the beloved TV series “day and night” and all the way through a total of 14 (!) times. “Honestly, because I’ve been getting older, every time I watch it I understand something new because I started at [age] 12,” she said. “Most of the things that I know are because of The Office. I swear to god.”

The “my future” singer revealed Michael Scott to be her favorite character on the show, and that she — like many of us — turns to The Office when in need of comfort. “It takes me away from the reality of my life,” remarked the 18-year-old Eilish. “It’s a safe space.”

Elsewhere in the final episode, dubbed “Beauty in Ordinary Things… The Legacy of The Office”, Jenna Fischer (Pam Beesly) and John Krasinski (Jim Halpert) pop in to bid farewell to the podcast. Stream the entire thing below.

In case you’re hankering for more of the Dunder Mifflin crew in podcast form, there’s Office Ladies, a series hosted by Fischer and Angela Kinsey (Angela Martin). Earlier this year, they aired an episode about that one mysterious teapot note Jim wrote for Pam.