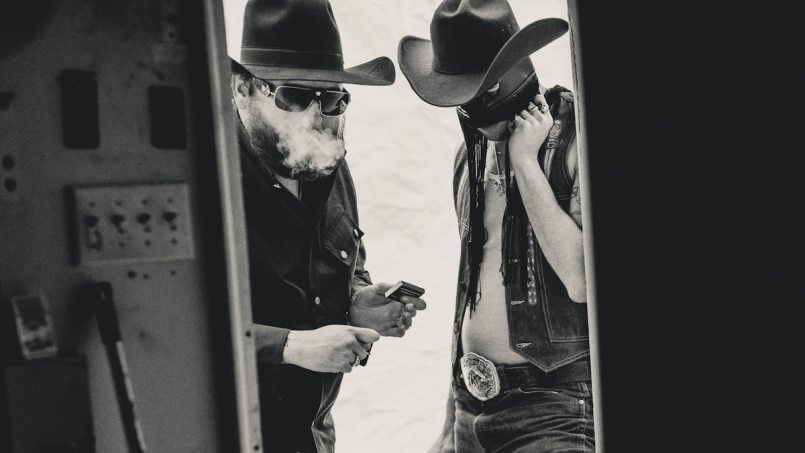 Paul Cauthen and Orville Peck, aka The Unrighteous Brothers

For this year’s Record Store Day, Orville Peck and Paul Cauthen make their debut as The Unrighteous Brothers.

As you may have gathered from their moniker, the two alt-country artists put their own spin on classic songs from The Righteous Brothers. Specifically, their upcoming 7-inch features renditions of “Unchained Melody” and “You’ve Lost That Lovin’ Feelin'”, both timeless hits from the ’60s.

Just as they offer refreshing takes on country music, Peck and Cauthen reimagine the Righteous Brothers in a way that stays true to their artistry. Which is to say their covers simultaneously honor the rich soulfulness of the originals while injecting just the right amount of earnest melodrama.

“When I first heard Orville’s voice, I knew we’d sound good together,” Cauthen remarked in a press statement. “I’ve always wanted to cover some Righteous Brothers tunes, but it took time to find the person I could pull it off with.” Well, the wait was certainly worthwhile.

Stream The Unrighteous Brothers’ two cover songs below. The recordings will be available on 7-inch this Saturday, September 26th, for Record Store Day’s second of three celebratory weekends. Proceeds will donated to MusiCares, which provides musicians with critical assistance in times of need.

In August, Peck dropped his Show Pony EP, which featured a great collaboration with Shania Twain called “Legends Never Die”. Cauthen released his most recent full-length, Room 41, back in 2019.