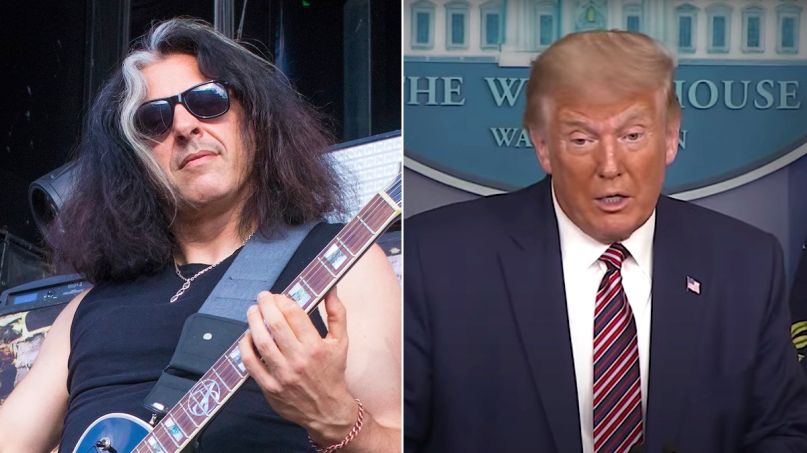 Testament’s Alex Skolnick has long been regarded as one of thrash metal’s finest guitarists, but now he’s showing off his rap skills. The metal musician spits verses on his new original track “Trump Sucks”.

The veteran rocker is not exactly Snoop Dogg when it comes to his flow, but he’s got some clever rhymes that spotlight his gripes with Donald Trump and the current administration in the White House.


Skolnick was inspired to write and record the song by certain responses to his recent Instagram post condemning the president. “This song just poured out of me yesterday,” wrote Skolnick about the song. “It was completed in a matter of hours. To all the # Trump2020 and # Maga folks who’ve been flooding my timelines ever since my post the other day about the election, I’d like to say thank you, sincerely. You’ve inspired me to do something a bit different (for me, anyway): Rapping. Enjoy!”

Among the lyrical highlights are lines like, “Sycophants and cronies/ Keep him in power/ Pissing on our norms/ Like a golden shower/ A life failing upward/ Not a heavy lifter/ An upscale slumlord/ Two-bit grifter.”

Skolnick, who is celebrating his 52nd birthday today (September 29th), is already getting some props on the song from his metal peers. Machine Head frontman Robb Flynn tweeted, “Who knew Alex could spit bars like that!?”

When he’s not rhyme-slinging, Skolnick is making music with Testament. Earlier this year, the thrash veterans released their 13th album, Titans of Creation. The band was set to embark on a North American headlining tour with support from The Black Dahlia Murder and Municipal Waste, but those dates were postponed due to the pandemic.

Check out Alex Skolnick delivering his rap song “Trump Sucks”, followed by his aforementioned Instagram post on the upcoming election.