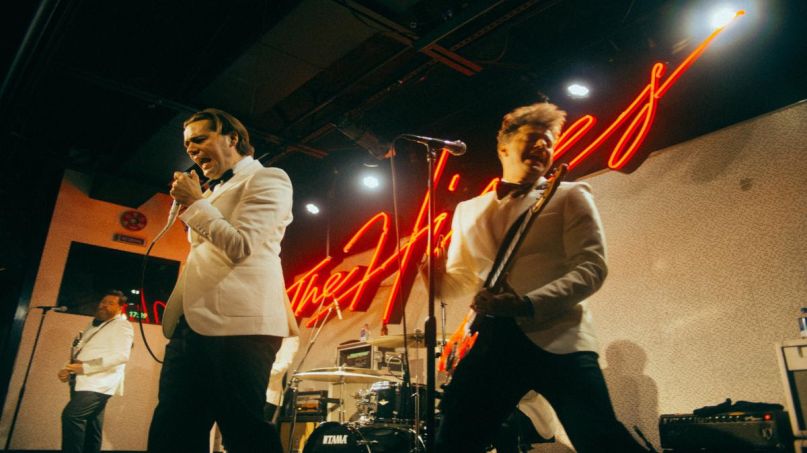 Evergreen rock and roll titans The Hives have announced a new live album called Live at Third Man Records. The seven-song LP is due out September later this month, but the Swedish punk troupe are previewing it today with a kick-ass rendition of their 2000 hit “Hate to Say I Told You So”.

The Hives are known for their high-energy sets (which they always perform while decked out in crisp suits), so it’s a little surprising that it took them this long to put out a live record. Regardless, the garage revivalists sound as tight as hell and electric as ever while busting out “Hate To Say”, a song that hasn’t aged a day in the 20 years since its release. Take a listen below.

In addition to early-era staples like “Main Offender” and “Walk Idiot Walk”, Live At Third Man Records features their 2007 classic “Tick Tick Boom” and a couple heaters from their 2012 album Lex Hives.

In a statement, the band said they’d been wanting to do a show at Third Man Records’ legendary “Blue Room” for a long time. “Feels good when words are put into action and that action — like always with The Hives — is Rock’n Roll perfection.” Fortunately, they were able to make the magic happen on their US tour last summer, because who knows when Third Man will open again with the coronavirus still posing a threat.

The live album is officially out September 25th, and pre-orders for the LP and CD versions are available now. Last year, The Hives also linked up with Jack White’s label for a 7-inch single that featured new songs “Good Samaritan” and “I’m Alive”. These tracks were billed as previews for a supposedly forthcoming record of brand new material, but no details have surfaced since then.