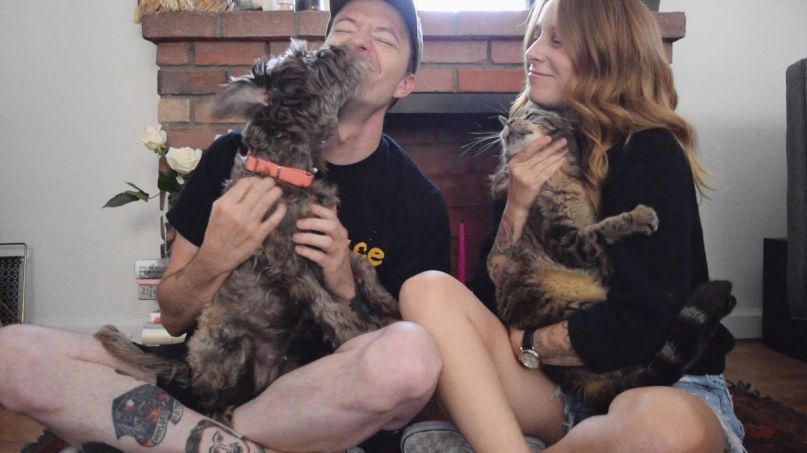 The release of Touché Amoré’s forthcoming album, Lament, is right around the corner (October 9th), and the band has served up one final preview with “Reminders”. The track’s music video is especially adorable, featuring many special guests… and their pets.

In addition to the members of Touché Amoré, the video includes appearances from Jim Adkins of Jimmy Eat World, Andy Hull of Manchester Orchestra, Tim McIlrath of Rise Against, Jacob Bannon of Converge, Frank Iero of My Chemical Romance, Anthony Green of Circa Survive, Jay Weinberg of Slipknot, Skrillex, and more — along with their fuzzy companions. The video truly is a sweet piece of quarantined cuteness, compiled from clips that each artist filmed individually.

“The music video for ‘Reminders’ conceptually was driven by bringing some joy to everyone’s timelines,” Touché Amoré singer Jeremy Bolm said in a press release. “If we can provide even just three minutes of joy to someone right now that’s enough for us, and who doesn’t love seeing awesome people and their pets?”

On the other hand, the song itself deals with far darker political subject matter and the emotional distress of the current administration and the result of Trump impeachment trial. In an interview with Heavy Consequence, Bolm discussed “Reminders”, which almost didn’t exist.

“I mostly refer that song as ‘the cursed song,'” Bolm told us. “It went through so many changes, and it was the song we almost scrapped once or twice because we couldn’t get it to work. … It ended up really taking on a life, and now it’s one of the songs I’m most proud of on that record.”

With Lament arriving on September, the band will host a livestream performance on October 12th at 6 p.m. ET on Twitch. The virtual event also features a Q&A with the band and a DJ set from Bolm. Exclusive merch will be for sale during the stream, including a vinyl LP version of Lament that’s limited to 300.

Stay tuned to Heavy Consequence for the rest of our interview with Bolm. Check out the clip of him discussing “Reminders”, along with the pet-filled music video, below. You can pre-order Lament via Epitaph Records and Amazon.