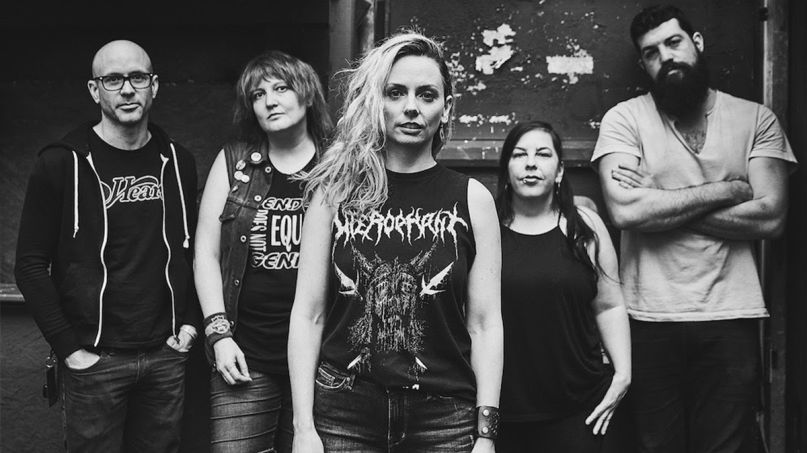 War on Women make no mistake about their views on modern society or the state of politics in the United States. Their songs read like a manifesto, and “Wonderful Hell” is no different. Singer Shawna Potter wrote the song during a period when she felt especially “exhausted and overwhelmed by the Trump era.”

“I can’t ignore what’s in front of me/ That fear is real, but not the enemy,” shouts Potter. In the lyric video, there is a notebook emblazoned with the hashtag “#VOTE”. It’s at the core message of the song.

“I think it expresses something that a lot of people are feeling,” Potter said in a press release. “Like, ‘Okay, we had our moment. Now it’s time to get back to work. We can’t let this happen again. We can’t endure another four years of this.”

Potter expressed that the songs should motivate listeners to become active, outspoken, and motivated to actually participate in reversing the current course of U.S. politics.

The full-length album was recorded pre-pandemic by J. Robbins of Jawbox at his Magpie Cage Studios back in February. Work on the record was completed in April, when the band was supposed to be on tour with Bad Religion. Wonderful Hell marks the first War on Women album to feature their current lineup of Potter, guitarist Brooks Harlan, bassist/vocalist Sue Werner, guitarist/vocalist Jennifer “Jenarchy” Vito, and drummer Dave Cavalier.

Pre-order the digital version of Wonderful Hell via Bridge Nine or Amazon. Physical pre-orders are forthcoming. You can stream the title track and check out the LP artwork and tracklist below.