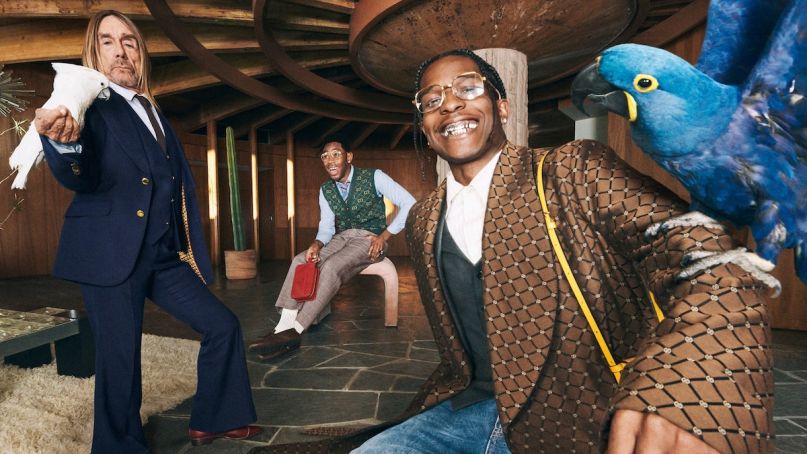 In the clip, Rocky and Tyler pull up to Iggy’s (fictional) house in a bright gold vintage car. The Stooges singer, along with his trusty pet cockatoo Biggy Pop, is expecting them, and struts outside to greet his guests in a striking animal-print suit. The two rappers also sport fresh threads, with Tyler going nerd-chic with a sweater vest and Rocky, ever the fashion maven, working in a tweed jacket and jeans. The party of three all then get down to “Supernature” by Cerrone and eat spaghetti in a mid-century modern paradise.

The whole thing was made back in February, pre-corona times, so no one was put at risk during the filming of this totally-not-socially-distanced project, including Iggy, who at one point attempts to make out with his own reflection. Check out the video ad below, followed by some Gucci press photos taken by Korine.

Gucci’s creative director Alessandro Michele noted the novelty of seeing these artists together. “A certain type of fun is also portrayed and the idea of how one’s obsession with appearances can create a kind of common ground that can become a sort of brotherhood,” said Michele. “It was beautiful to see these three men together, seemingly different but very similar.”

In related news, Tyler released a video on Monday imploring everyone “whose back don’t hurt” to go vote in person on Election Day in November. Find that at the bottom of the post.

Recently, Iggy joined up with Bootsy Collins on a cover of “Family Affair” by Sly & the Family Stones, and Rocky performed at the 2020 Lollapalooza livestream in July.