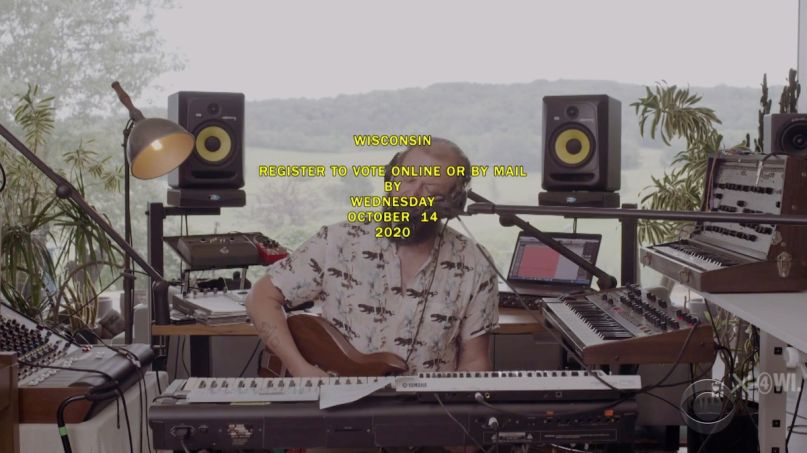 Even with Bernie Sanders out of the presidential race, longtime supporter Justin Vernon is still very closely following the 2020 Election. In fact, earlier this week, the Bon Iver leader helped launch For Wisconsin, a “get-out-the-vote” initiative in his home state. “Free speech and freedom begin and end with voting,” read a statement. “If you don’t mark your ballot someone else will define your Wisconsin and your future.”

In support of this new campaign, Vernon delivered a #PlayAtHome performance for the Late Show with Stephen Colbert this afternoon. With his equipment set up in front of a large window, the indie rocker unfurled “22 (OVER S∞∞N)”, from his 2016 Bon Iver album 22, A Million. Throughout the appearance, Vernon’s face was covered by a message imploring Wisconsin natives to “REGISTER TO VOTE ONLINE OR BY MAIL BY WEDNESDAY OCTOBER 14 2020”. Viewers now have no excuse for not knowing the appropriate deadlines.

Watch the video replay down below, followed by Vernon’s For Wisconsin announcement.

Election Day is Tuesday, November 3rd, and contrary to what some idiot thinks, mail-in voting is completely legitimate. Whether that same idiot quietly accepts the election results is an entirely different issue.

Today, a live performance of “22 (Over S∞∞n)” from 22, A Million will be premiered on @colbertlateshow #PlayAtHome series. We are very happy to share this very special performance #ForWisconsin.