Another gripping visual in support of Chromatica 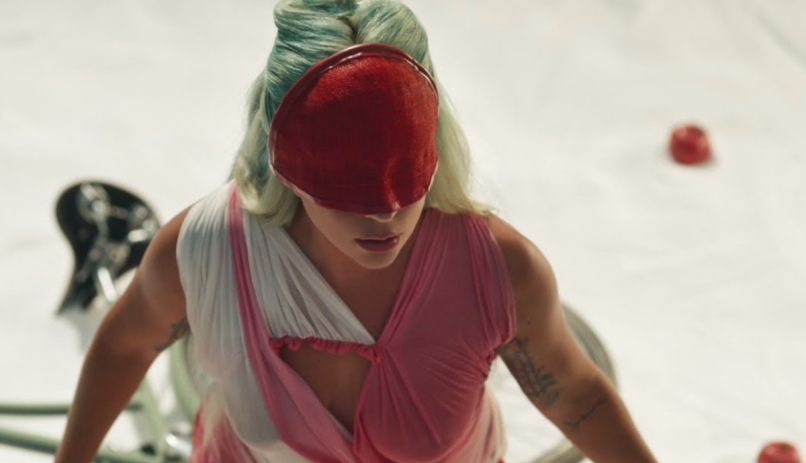 Lady Gaga has premiered her epic new music video for the Chromatica single “911”. Watch the clip down below, directed by filmmaker Tarsem.

Considered by the pop megastar as a “short film”, the clip follows Gaga as she traverses a desert and follows a mysterious horseback rider to a remote village. It’s there where the previously masked Gaga marches out one incredibly detailed outfit after another in true Gaga fashion.

Some have her draped in blue, see-through lace, while others feature ornate headpieces. She and those around her perform ritualistic movements, and there’s more than a handful of seemingly religious imagery (one Mary-like character wears an elaborate white dress with a red cross emblazoned on her chest). There’s also a scene in which Gaga ascends into the air, but a rope around her ankle momentarily keeps her tethered to an armored guard — perhaps a metaphor for the song’s overarching themes.

In previous interviews, Gaga said “911” is about “an antipsychotic that I take. And it’s because I can’t always control things that my brain does. I know that. And I have to take medication to stop the process that occurs.” In an Instagram post uploaded on Friday, Gaga added, “The short film is very personal to me, my experience with mental health and the way reality and dreams can interconnect to form heroes within us and all around us.”

BloodPop, her longtime collaborator and executive producer of Chromatica, offered similar comments about “911”. “[Medication] is not fun to talk about for most people, but it’s a very real part of modern life for those who need it,” he told EW.

“This was her truth and she wanted to write about it even though she knew it would be painful to ‘go there,'” he added. The song “hit me particularly hard as well because at the time I had to get on medication for OCD and depression for the first time in my life.”

Chromatica is one of the best albums of 2020 so far. In support, Gaga last month delivered a show-stopping medley at the MTV VMAs, centered around her “Rain on Me” hit with Ariana Grande.

This short film is very personal to me, my experience with mental health and the way reality and dreams can interconnect to form heroes within us and all around us. I’d like to thank my director/filmmaker Tarsem for sharing a 25 year old idea he had with me because my life story spoke so much to him. I’d like to thank Haus of Gaga for being strong for me when I wasn’t, and the crew for making this short film safely during this pandemic without anyone getting sick. It’s been years since I felt so alive in my creativity to make together what we did with “911”. Thank you @Bloodpop for taking a leap of faith with me to produce a record that hides in nothing but the truth. Finally, thank you little monsters. I’m awake now, I can see you, I can feel you, thank you for believing in me when I was very afraid. Something that was once my real life everyday is now a film, a true story that is now the past and not the present. It’s the poetry of pain.