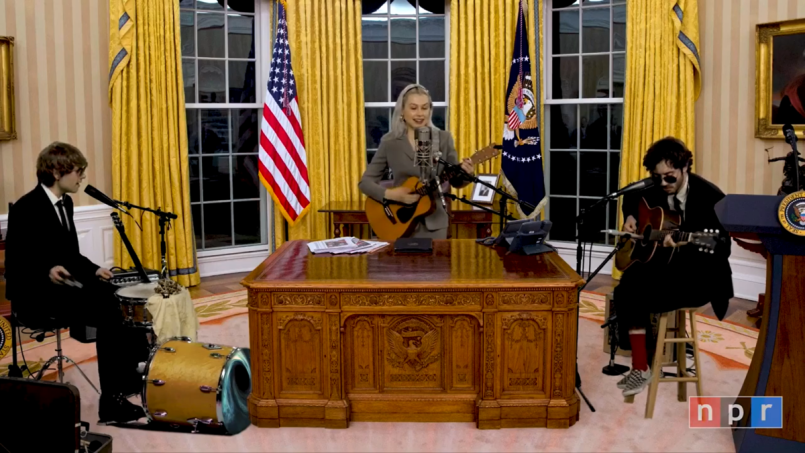 In non-pandemic times, Tiny Desk artists typically would visit the NPR office to play their songs in between rows of literal tiny desks. However, an unprecedented moment like the one we’re experiencing calls for unprecedented action, and today, Phoebe Bridgers has risen to the challenge to perform behind the greatest desk in all the land: the one in the Oval Office.

Well, not quite. For her edition of the ongoing Tiny Desk (Home) concert series, Bridgers fashioned her livestream space into a green-screened version of the president’s office, accomplishing the only good thing that’s happened within those walls in at least four years. The indie singer-songwriter performed three knock-outs tracks — “Kyoto”, “Moon Song”, and “I Know The End” — from her excellent new album Punisher, and even enlisted the help of some special fans.

Towards the end of her mini set, the White House decor came down, and Bridgers and her bandmates leveled up from acoustic to full-band instrumentation. Is this Bridgers’ way of announcing her last-minute presidential run? We’ll take her over Kanye any day. At the very least, it’s definitely the closest any recent Tiny Desk has come to channeling the catharsis of a real-life gig, and you can experience it below.

Technically, this is Bridgers’ fourth appearance on the the Tiny Desk series. Back in 2017 she performed songs off her solo debut Stranger In The Alps; in 2018 she did a set with her boygenius bandmates Lucy Dacus and Julien Baker; and in 2019 she and Conor Oberst stopped by for a Better Oblivion Community Center performance.

Since Bridgers released one of the year’s best records so far, the former Artist of the Month has been keeping busy on the livestream circuit. Earlier this week she and Arlo Parks covered Radiohead’s “Fake Plastic Trees” in a church, and back in August she teamed up with Courtney Barnett to reimagine Gillian Welch’s “Everything Is Free”.