An all-star collaboration off Public Enemy's new album, What You Gonna Do When the Grid Goes Down? 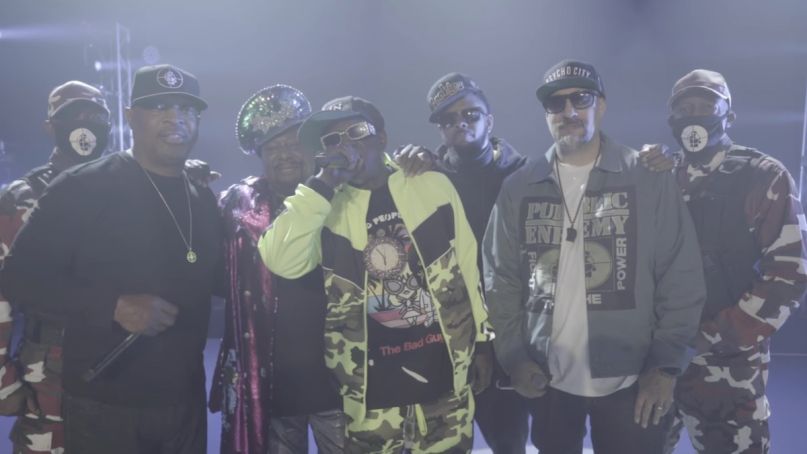 Last Friday, Public Enemy returned with What You Gonna Do When the Grid Goes Down?, the first album in 20 years with Def Jam Records. To support the release, the rap legends appeared on the Late Show with Stephen Colbert on Tuesday.

Public Enemy — that’s Chuck D, Flavor Flav, and DJ Lord — threw down their rallying single “Grid”. What’s more, they did so with help from famous collaborators George Clinton and B-Real of Cypress Hill. As to be expected, the Prime Minister of Funk came dressed for the occasion, rocking a flashy red trench coat and totally bejeweled (or is it sequined?) gas mask. Flavor Flav, too, sported some of his own shine, thanks to his diamond-encrusted shades. Replay the performance down below.

What You Gonna Do When the Grid Goes Down? also features contributions from Beastie Boys’ Ad-Rock and Mike D, Run-DMC, Nas, members of The Roots, Ice-T, YG, and DJ Premier. In our review of the album, Okla Jones called it “a social, economic, and political statement for 2020. Chuck D’s hard-hitting lyrics and the album’s dynamic production can serve as a soundtrack for the American Dream (or nightmare, depending on your perspective) for the foreseeable future. Public Enemy seem here to stay, but the truth is — they have never really left.”