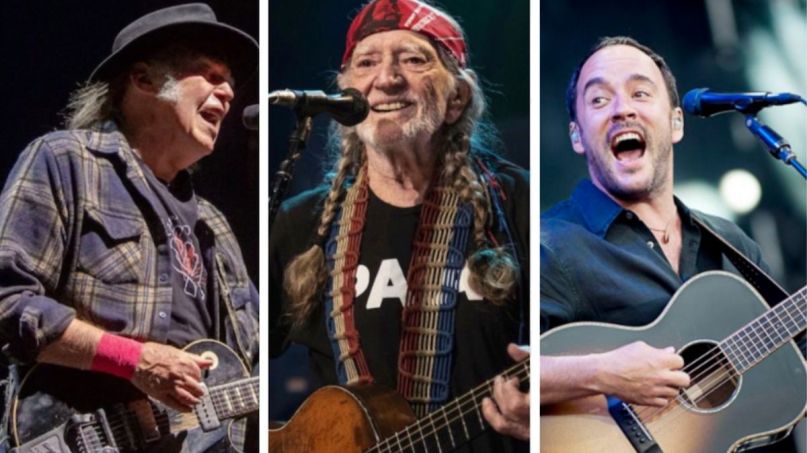 With the pandemic still in our midst, family farms are in need of support now more than ever. This is why Farm Aid — the annual benefit concert spearheaded by Willie Nelson, Neil Young, Dave Matthews, and John Mellencamp — is forging on this year as a virtual event.

Other acts expected to appear include Edie Brickell with Charlie Sexton, and Particle Kid, as well as The Record Company, Valerie June, and The War And Treaty, with more to be announced in the coming weeks.

In a statement about the importance of the concert, Farm Aid founder Willie Nelson said, “This pandemic and so many other challenges have revealed how essential family farmers and ranchers are to the future of our planet,” adding, “Farm Aid 2020 is going to give the whole country a chance to learn about the important work of farmers and how they’re contributing to our well-being, beyond bringing us good food.”

Matthews chimed in, telling Good Morning America that “I think that [farmers] are at the heart of everything that human beings have.” He continued, “It seems all too often that the farmers are forgotten or they are voiceless and their struggles remain very often unheard. And now is a time when farmworkers and farmers are struggling — in some ways more because of the crisis.”

Playing Farm Aid for the fifth time, Price spoke about her personal connection to the family farming industry and why this year’s concert is essential. “I come from a long line of farmers and my family lost their farm in the early-mid 80s,” she said to Good Morning America. “This is a way for me to pay tribute to what they did and to be able to help other people that are struggling. I think Farm Aid has been preparing for a crisis like this all along when we need to help family farmers and small businesses, the moment is now.”

“Farm Aid 2020 On the Road” officially goes down September 26th at 8:00 p.m. ET via the company’s YouTube channel, AXS TV, and Fans.com. In addition to live music, the broadcast will feature first-hand stories from actual farmers across the US.

Earlier this year, right as the global health crisis began, Nelson presented “At Home with Farm Aid”, a digital concert featuring performances by Young, Mellencamp, Matthews, and Nelson himself.

Our lineup is incredible this year. pic.twitter.com/IplKmPwJXY