The singer will perform his debut solo album in full, along with favorites from Slipknot and Stone Sour 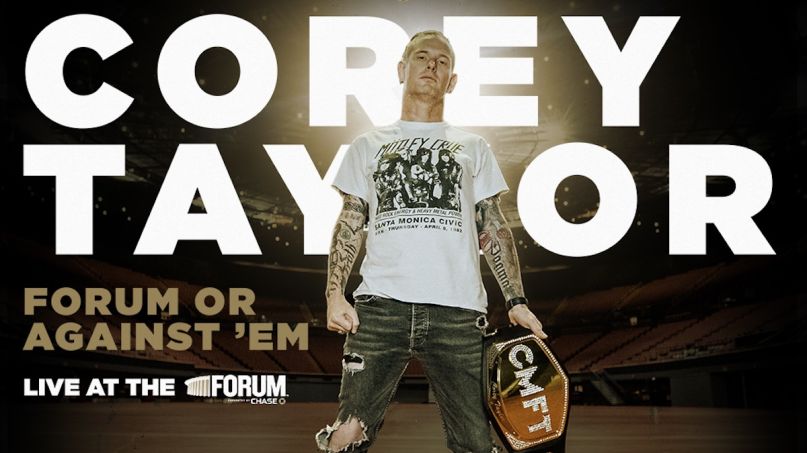 Corey Taylor is performing a full-production arena show at The Forum in Los Angeles, and he wants you to be there — virtually! While there won’t be an audience in the venue, the “Forum or Against ‘Em” concert will be streamed worldwide on October 2nd, and we’re giving away five virtual tickets to the show.

Not only will Taylor perform his new solo album, CMFT, in its entirety, he’ll also break out favorites from his bands Slipknot and Stone Sour. On top of that, he promises a few cover tunes, too.


“I’ve been saying since the beginning I’d find a way to bring this music and this band to the people,” stated Taylor of the streaming concert. “And I’m honored that The Forum let us do just that. It’s CMFT in its entirety. It’s songs I’ve shared over the years. It’s a celebration, and I’m so stoked to party with all of you.”

In addition to Corey Taylor’s performance with his solo band, the stream will feature the rock ‘n’ roll dance squad The Cherry Bombs, led by Taylor’s wife, Alicia Dove. Moreover, a one-hour pre-show will include behind-the-scenes footage and exclusive interviews.

If you want to guarantee yourself admission to the show, virtual tickets are available now. You also have the option of bundling the ticket with a T-shirt or sweatshirt, and other memorabilia. And for diehard Corey Taylor fans, there’s even a virtual meet-and-greet option. All ticket packages are available here.

The show gets started at 5 p.m. ET / 2 p.m. PT on Friday, October 2nd, the same day that Taylor’s debut solo album, CMFT, arrives. For a chance to win one of five virtual tickets, simply enter using the widget below. Note: If you do not see the widget, click here to enter. Winners will be emailed with a code to watch the concert for free.