The six-track Wake of a Nation EP arrives October 23rd 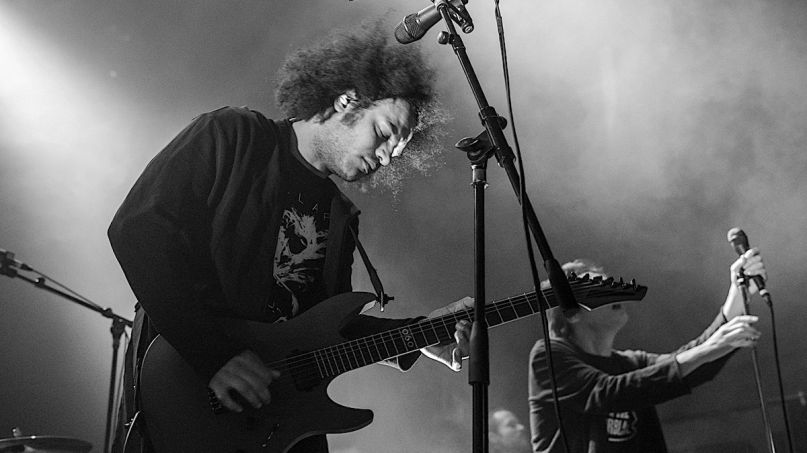 Zeal & Ardor have announced a new six-song EP titled Wake of a Nation. In advance of the EP’s October 23rd release date, the avant-metal act has unveiled two tracks, “I Can’t Breathe” and “Vigil”.

As implied by those titles and the EP’s artwork — featuring two police batons — it’s a politically charged record from Zeal & Ardor, composed during months of unrest in the United States following the death of George Floyd in police custody and other similar incidents.

The group had originally planned to release an album next year, but these songs couldn’t linger and were unleashed without hesitation. As frontman Manuel Gagneux wrote on the band’s Facebook page:

“Wake of a Nation‘s intent and context should be obvious. I like to revel in ambiguity and in room for interpretation. This is not the case here. These 6 songs are a knee jerk reaction to what has happened to my fellow people in the last months. Originally I was set to record an album scheduled to come out next year. As these songs were written due to the horrendous events that instilled them I decided to release them as soon as possible. Using the rich heritage and culture as a part of my musical identity it felt like cowardice to sit by and continue with my routine as if nothing happened.

This record is for Michael Brown, Eric Garner, George Floyd and the countless untold and nameless killed.
It is for the brave souls willing to take a stand and ready to risk their own wellbeing so that others may have theirs intact. All revenues from sales and streaming of ‚I Can’t Breathe‘ will be donated.”

Other track titles indicate apprehension and themes of political deceit with titles like “Trust No One” and “Tuskegee” — a possible reference to the Tuskegee Syphilis Study, a horrendous 40-year experiment that exploited and deceived African-Americans who were told they were receiving free health care but were actually test subjects for a Federal study on the natural history of untreated syphilis.

Amidst the turmoil, it has been a creative time for Gagneux, who also recently revived his solo project, Birdmask, with the single “Set Me on Fire”.

Pre-order the Wake of a Nation EP via Zeal & Ardor’s Bandcamp. Stream the two singles and check out the EP’s artwork and tracklist below.

Wake of a Nation EP Artwork: