Bruce Springsteen’s Letter to You Boldly Looks to the Future: Review

The Boss and E Street Band deliver a vital set of songs devoted to aging, death, and legacy 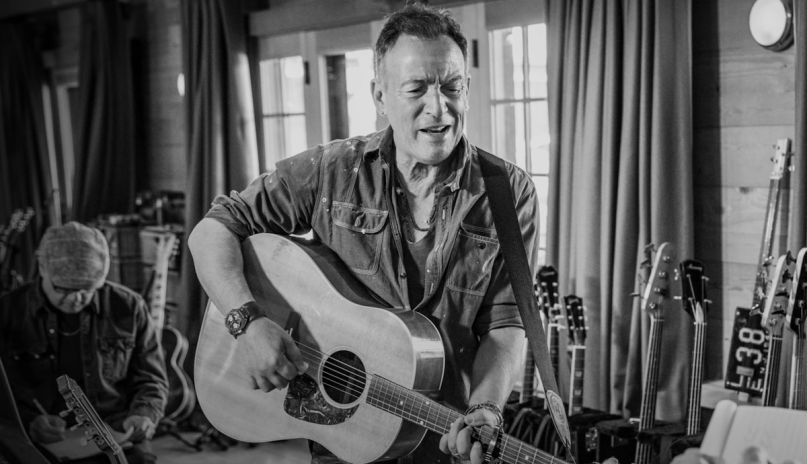 The Lowdown: Even bosses get writers’ block sometimes. Such was the case for Bruce Springsteen in early 2019. Facing down 70 and preparing to release Western Stars (his best-reviewed record in nearly a decade and one of our top 50 albums of 2019), Springsteen wasn’t totally sure what might come next. On his 20th studio album, he answers that question on both a micro and a macro level. Much like Western Stars found Springsteen exploring bygone California sounds from Los Angeles to Bakersfield, Letter to You also discovered its inspiration in the not-yet-faded past. In addition to a newly vital set of songs devoted to aging, death, and legacy, Springsteen also resurrected three tracks written before his 1975 debut and reconvened the E Street Band for their first full-length studio collaboration since 2014’s High Hopes. Recorded live in the studio in just four days without overdubs, Letter to You finds Springsteen asking and answering the big questions: How do we remember the dead? What are we leaving behind? Five decades into a career in music, what more is there left to say, and how can we best say it while we still have the chance?

The Good: As a musician for whom nostalgia has always been close at hand, Bruce Springsteen is better equipped than many artists of his caliber for the elder statesman portion of his career. On Letter to You, he wastes no time proving it. Written with departed collaborators like Danny Federici, Clarence Clemons, and George Theiss in mind, “One Minute You’re Here” is an autumnal memorial to lost friends made all the more impactful by its arrangement. What begins as a mournful acoustic ballad soon sees Springsteen’s cracked-leather voice joined, one by one, by his still-living friends, whose instruments paint a picture of the E Street Band coming in to support and bolster their grieving singer.

Questions of legacy animate many of the best songs on Letter to You. Valedictory bar rocker “Ghosts” retraces the history of Springsteen and Theiss’ early days in Asbury Park as members of the Castiles, “If I Were the Priest” reinvents an archival slice of Technicolor Western allegory with the old-man weariness that would’ve been artificial 50 years ago, and “Letter to You” goes meta with a sweet meditation on music’s ability to absolve its maker and uplift its listeners. Along the way, Springsteen walks a careful lyrical rope, paying homage to the memories that live only within him while still doing the burdensome work of living on their behalf. Closer “I’ll See You in My Dreams” feels like a bookend and a benediction, one that releases the people and places that have gone before and embraces the discovery of whatever undiscovered country remains.

On a different, more worked-over album, these songs might’ve evolved into sonic self-indulgence. However, the live-studio takes that produced Letter to You also infuse even its heaviest subject matter with a much-needed sense of urgency. It also gives us yet another chance to appreciate the astonishing veteran precision that exists within the E Street Band; from Charles Giordano’s soaring organ jolting the stomping “Burnin’ Train” to life to Max Weinberg’s big, big drums echoing throughout “Ghost”, the ensemble shows that, when you have the right kind of chemistry, overdubs are overrated.

The Bad: While the autobiographical elements of Letter to You represent some of Springsteen’s most personal and revealing music in years, the record’s less intimate tracks don’t always rise to that same level. Love song “The Power of Prayer” tips into schmaltz and suffers by structural comparison to preceding track “Last Man Standing” while “House of a Thousand Guitars” paints a plodding picture of an afterlife that sounds suspiciously like a Guitar Center. The archival tracks presented here also aren’t quite the revelations they might’ve been. With its call-backs to “My Back Pages”, “Song for Orphans” skirts perilously close to the Bob Dylan fakebook while “Janey Needs a Shooter” turns plodding before it’s even half over.

The Verdict: As the final strains of “I’ll See You in My Dreams” fade to a close, you might be struck with the following thought: if Letter to You was the swan song, if there were no more Springsteen albums after this one, this would be a mighty fine way to go out. That’s not the plan, of course. Springsteen still has more music to play, both live and in the studio. However, it does speak to the quality of Letter to You, both as a record within an already loaded catalog and a summation of a five-decade career spent translating hopes, fears, and dreams into life-changing rock songs. Not many artists reach 20 albums, and even fewer do it with such aplomb. Or, to put it another way: here’s to 20 more.

Essential Tracks: “One Minute You’re Here”, “If I Was the Priest”, and “Ghosts”

Pick up a copy of Letter to You here…

Letter to You Artwork