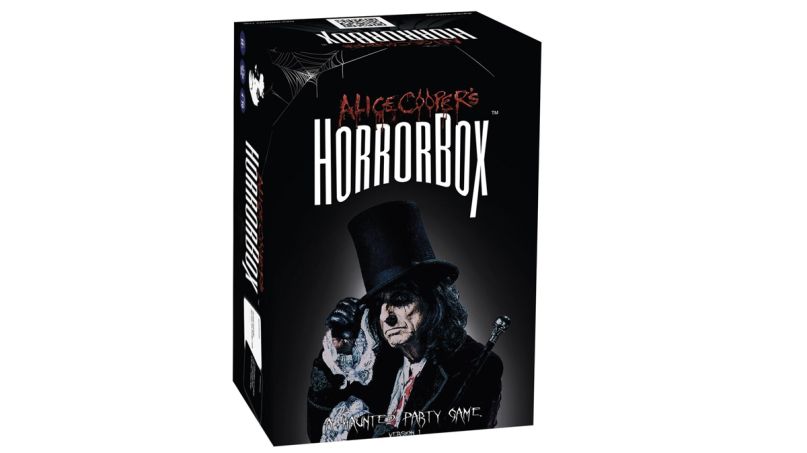 When he’s not satirically running for president, the legendary Alice Cooper usually has his hands in a variety of multimedia projects, from his long-running syndicated radio show to inspirational music videos. The shock rocker’s latest endeavor is just in time for Halloween: a horror-themed party game called HorrorBox.

The Cards Against Humanity-style game was written by Cooper and a host of other horror fanatics. It takes the basic CAH concept of pairing setup and answer phrases from different cards to create absurd statements. For example: “‘The tenth circle of hell is for’ … ‘setting up my haunted house as an Airbnb.'” There are also dare cards mixed in with the question cards, prompting players to engage in a spooky action.

Cooper’s version of the addictive game is geared specifically for fans of horror films and ephemera. “You will become the Addams Family,” Cooper warns on his website, “if that’s your goal in life.”

“This is 2020, which means all things are upside down and backwards,” Cooper adds. “You’re going to be staying home a lot, so why not play HorrorBox. It’s something totally new, fun for everyone. I helped write a lot of the stuff in it.”

HorrorBox is recommended for ages 14-plus. The base game retails for $25 and includes 420 cards. There are also seven expansion packs that introduce more phrases and answers, including a 40-card expansion written entirely by Cooper.

Halloween and the upcoming election means its a busy season for Cooper. Every four years, he re-releases his 1972 single “Elected” with a mock presidential campaign. This year was no different, with Cooper dropping an updated music video and joining the race on the campaign platform “I can do nothing as well as they can do nothing,” which is not necessarily true. Cooper also just released his own chocolate milk (!) to raise funds for his Solid Rock nonprofit organization. That’s definitely something.

Check out Cooper’s video introduction for HorrorBox below. You can order the game and expansions via Fitz Games.