Artist of the Month beabadoobee on Catching COVID: “It Gave Me Space to Write Music”

The London-based songwriter drops her full-length debut, Fake It Flowers, on Friday 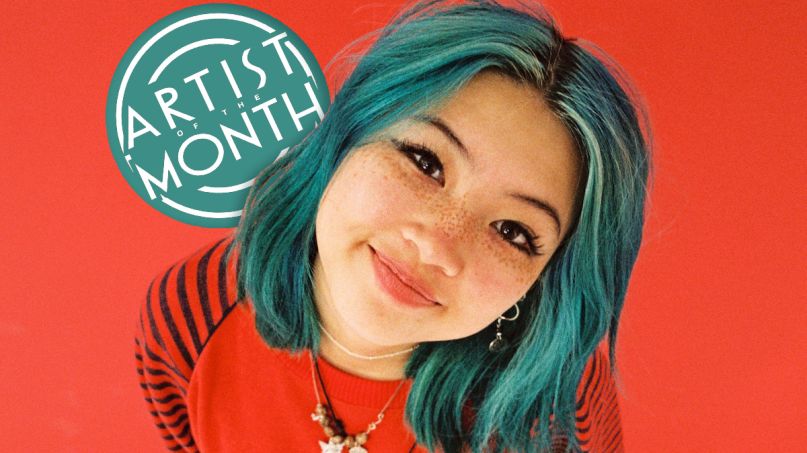 Artist of the Month is an accolade we award to an up-and-coming artist who we believe is about to break out. In October, we watch as beabadoobee brings a ’90s rock palette into the 21st century.

There’s literal truth and there’s poetic truth. Poetically speaking, beabadoobee is somewhere in her fourth or fifth decade: a grizzled guitar god with dozens of tours under her belt and a lyrical clarity suggesting years of self-reflection. Close your eyes, and you can hear a lifetime of vivid experiences. Literally, though, she’s only 20 years old — a charismatic, young woman trying to keep her balance as the world shifts under her feet. Her musical career is shockingly young; carnival goldfish have been around longer.

None of this was part of the plan. Bea had vague designs on becoming a nursery teacher, but when she was 17, she and her school had a not-quite-mutual parting of ways (“I got kicked out”). Afterwards, she sank into a funk, and her father bought her an acoustic guitar to try and snap her out of it. She learned how to play chords from YouTube. That’s a well-trod path, but almost instantly she found herself wandering off the map. The first song she ever wrote, “Coffee”, went viral. She had a record deal before she felt comfortable holding a guitar.

What followed was a string of exciting EPs (Lice, Patched Up, Loveworm, Space Cadet) and almost equally exciting hair colors (pink, orange, red, blue, end-of-the-rainbow ombre.) From the beginning, Bea’s throwback sound has been paired with an exuberant visual presentation. Even as she referenced a ’90s musical palette, her style was very much part of the 21st century. “I do tend to romanticize the past,” she says. That combination of nostalgia and media savvy has built her a coalition of fans young and old, with Gen-Z TikTokers lining up next to moms and dads in old, faded flannels.

In the wake of Space Cadet’s breakthrough success, she squared up her first headlining tour and a string of festival showcases. However, the worldwide pandemic scuttled those plans, and early on Bea herself caught COVID-19. While that experience was “obviously shit,” it turned out to be a “blessing in disguise.” She threw herself into songwriting and came out the other side with Fake It Flowers, her stunning debut album.

Now she’s poised on the cusp of stardom, though still, she says, “I probably wouldn’t consider myself a rock star.” In conversation, she’s most comfortable talking about her pre-“Coffee” interests like breakfast food and thrift store shopping. When her successes come up, a note of dizziness colors her voice, as if that breathtaking ascent left her with vertigo. This, too, shall pass. Fake It Flowers is a special accomplishment, and her prodigal skills and natural charisma all but guarantee beabadoobee’s staying power. “Rock star” may be an awkward fit for now, but you can bet she’ll grow into it.

On Her Earliest Musical Memories

Listening to Filipino radio in the background of my childhood. That was very apparent. My mom would always turn the radio on or play music. Alanis Morissette, The Cranberries, my mom used to play them in the background. Somehow, I just rediscovered them during Fake It Flowers. It felt so familiar to me because it was always played when I was young. And that nostalgic feeling I really want to give to the people who listen to my music. Good music from that time.

I do tend to romanticize the past. The music was just so amazing, and the fashion. I just find so much inspiration in that.

On Learning the Guitar

I wasn’t at school. I got kicked out. And I was in a really bad space. It was pretty obvious, and my Dad saw I was really sad. He came home with a second-hand classical guitar. I was like, “Oh, this is cool.” Bear in mind, I’d played violin for seven years and then stopped doing it. I was a pretty lazy teenager. And then my dad had bought a guitar. I think it was because I played violin that it was quite easy for me. Then I watched YouTube tutorials, and I learned “Kiss Me” by Sixpence None the Richer. And the chords are [laughs] very similar to my first-ever song called “Coffee”. That was the first song I ever wrote on guitar.

I’ve been playing guitar for — I think I was 17 or 18, so two to three years. I really want to start shredding. I’m still learning. I feel really blessed in that sense because I’m quite new to playing guitar and I’m still learning. It’s just that I really do want to know the technical side of it. [And] I really wanna learn the harp. I wanna be a harp god. It’d be so badass. I just wanna be that chick.

The melody lines he came up with and how satisfying his chord progressions were and how his voice sits on it like he’s talking: it’s just the coolest. I remember discovering — my boyfriend’s brother showed me Pavement on a car ride to Ikea. He was playing it on the motorway, and I was like, “Who the fuck is this? It’s amazing.”

That dude is awesome. He has the chillest life and the coolest kids. I met him once. He came to one of the shows. And I played “I Wish I Was Stephen Malkmus” on stage. I was like, “This is dedicated to Stephen Malkmus.” And then he came to my tour bus. He was chilling on my tour bus and he’s the coolest guy. I was starstruck. And I think to live a life like him — be a freakin’ legend, but also have a really chill life — I think he’s doing it right.

On the Coronavirus Pandemic

It’s kind of a blessing in disguise. Even though I literally had corona at the beginning, and it was shit. I was cured. I mean, I just stayed at home. I’m a young woman. I’m glad I got it instead of my family. So, at the beginning, it was obviously shit, and then I was supposed to go on tour with a full band. And I thought I was ready for that. And then corona happened, and being isolated made me realize, “Oh fuck, I wasn’t really ready to tour this year.” And maybe I had to stay at home to fucking fix my head a bit. It gave me time to reflect on everything that’s happened, you know? Fix my shit and fix relationships that I kind of lost because of tour.

It gave me space to write music. I had all the time to live in my album and to set the aesthetic vision of Fake It Flowers — what I want it to look like and how I wanted it to be received. You know, that’s just me looking at positives. Obviously, corona had cons. I was supposed to play at my favorite festivals and I couldn’t. I was gonna do Glastonbury. I wanted to do Reading. It would be so weird playing a festival. And Coachella and Delphi. Supersonic in Japan is canceled. I’m glad I was given this time to prepare myself for more.

On Fake It Flowers Being So Deeply Personal

It’s obviously really daunting. When I’m writing, I don’t think about that. When I’m recording, I don’t think about that. But it just hits me, realizing how much people listen to it after the song is out. At that time, I think to myself, maybe I shouldn’t be this person. At the same time, I always tell myself, if at least one person can relate to one of the songs of Fake It Flowers — or any of my music — that makes everything worth it. For another girl to be like, “That happened to me,” it makes everything so much more worth it. Writing music, even though it helps me organize thoughts in my brain, can help other people, too. It’s fucking wild.

On Life in the Spotlight

I wanted to be a nursery teacher. I’m not ready to get attention, so that stuff’s really intimidating to me. You know, the whole music thing is so glamorized and people kind of dismiss the fact that — you know — we’ve had so much hate, and there’s so much hate in the world. With attention comes unwanted attention.

I feel like that’s something I’m only starting to get used to now. Because obviously everything happened so fast. I guess it was really overwhelming to me as a person. I just go out and all the attention’s on me. I’m lucky enough to have a really supportive group around me. That gives me the freedom to make the music I’ve always wanted to make. I love music, and I feel like it’s worth it.

On Her Breakfast Routine

The things is, I don’t cook. My dad and my mom still cook me breakfast. When I’m away from home, I really don’t have breakfast, and it really sucks. But every time I’m home — and because of corona — I’ve had really good breakfasts.

On Shopping at Thrift Stores

You know, there’s a secret. It’s basically go to the children’s section if you’re a girl. You get loads of cute, little tank tops and little baby tees. Yeah, and it’s also patience. You have to be patient when finding things in thrift stores because there’s so much shit … you really just have to look through every single room to find a really good item of clothing.

On Tuning Her Guitar

I have a few methods. I’ve had down tuning, Stephen Malkmus tuning, and two of them I made up myself. I mean, the thing is, everyone always asks, “What tuning is this song?” And I’m like, I wish I could tell you this technical guitar thingy, but I literally just used my ear. Like, oh, that sounds nice. Can I keep that in tune to make that sound?