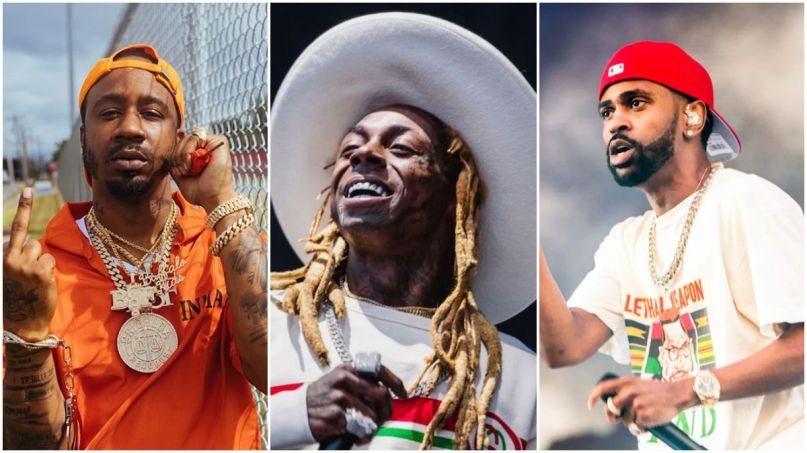 Benny the Butcher has announced a new album called Burden of Proof, due out next week. As an early look, the Griselda rapper is sharing a collaboration with fellow rap veterans Lil Wayne and Big Sean that’s appropriately titled “Timeless”.

Benny’s prolific label mates, Conway the Machine and Westside Gunn, have each already dropped three albums (!) in 2020 alone, but the New York-bred MC is slowly but surely catching up: Burden of Proof marks his second effort of the year following his joint record with DJ Drama from July.

“If you understand the meaning (Burden Of Proof), it’s one trying to prove their assertion; and that’s what I’m doing with this album” Benny said in a statement. “This is the validation of what I have been saying all this time about Griselda, BSF, Benny The Butcher, coming to fruition. The Burden Of Proof always lies with me.”

To back up all that posturing, the gritty street rapper is teasing the LP with “Timeless”, which boasts two of the highest profile features he’s ever landed. The single includes a ritzy Hit-Boy beat with bulging bass and a hint of West Coast flavor. Benny’s hook flaunts his divine immortality (“What’s a king to a god, n***a?/ I’m gon’ live forever”), while Weezy and Big Sean deliver solid bars that exhibit all of their classic charms and quirks. Take a listen below.

We don’t have a tracklist or cover art for Burden of Proof, but it’s set to drop one week from today on October 16th.

Last week, Benny made an obligatory appearance on Westside Gunn’s new album WHO MADE THE SUNSHINE, and a month before that he popped up on Conway the Machine’s From King To A God. Big Sean made his guest-heavy return in August, while Lil Wayne most recently delivered a deluxe edition of his 2018 album The Carter V last month.