Beyond the Boys’ Club: Cammie Gilbert of Oceans of Slumber 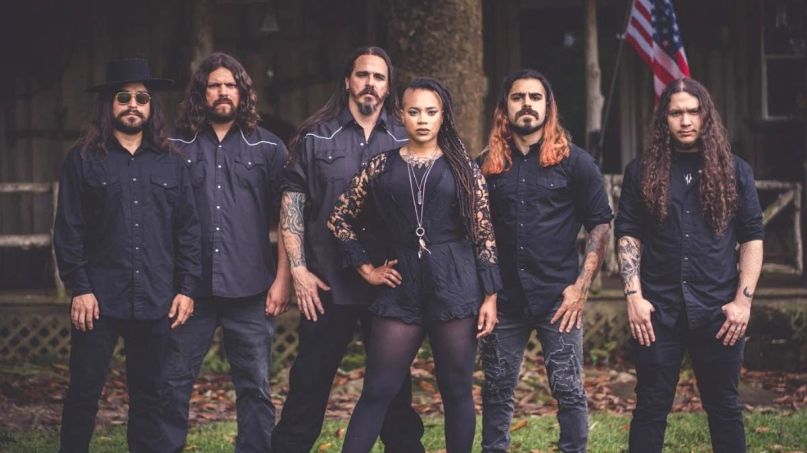 Oceans of Slumber, via Century Media

Beyond the Boys’ Club is a monthly column from journalist and radio host Anne Erickson, focusing on women in the heavy music genres, as they offer their perspectives on the music industry and discuss their personal experiences. This month’s piece features an interview with Cammie Gilbert of Oceans of Slumber.

Oceans of Slumber recently released their fourth LP, a self-titled album, cementing the group as a promising, rising heavy metal band to watch. Fronted by powerful vocalist Cammie Gilbert, the Houston-based outfit serves up a mighty mix of doom metal and soul, with a dash of gothic metal, as well.


With fresh music out, Oceans of Slumber were looking forward to 2020 being a big year of touring, but the COVID-19 pandemic had other plans. Even so, Gilbert and company remain inspired and eager to take the songs off Oceans of Slumber on the road, whenever it’s safe.

Gilbert checked in with Heavy Consequence for the latest “Beyond the Boys’ Club” column to discuss the new album, her experience as a woman in metal music, and how she has overcome some obstacles she has faced along the way. Read the full interview below.

There had been so much transition that had come about in the band, and our outlook can be pretty serious most of the time. We just spoke about never knowing if that next album will be your last. So, between the band and then everything going on in the world, we approached this one as kind of a make or break for what we were continuing to do and took a bit of a different approach to our sound. So, given that we wanted kind of a fresh start and also to just make that statement, we decided to go with a self-titled album.

On her favorite track off the album

I really love “Pray for Fire”. I feel like it’s such a huge piece, such a dynamic song. I think it really showcases what we can do and that sort of atmosphere that we can build. That song was definitely a pillar of what the rest of the album kind of revolved around.

I think that it has a lot more of a cinematic quality. That’s definitely something that we’ve tried to include in previous albums, but I think that this one really captured that sort of a mental visual that goes along with what you’re listening to. The sort of atmosphere and attitudes that went into this album drive it in a more focused way, and I feel like it gives a complete journey to each listener.

It undercut all of our live shows and festivals and things that we had planned. It’s fully taken out that live dynamic of seeing how these songs would be translated live and first received. So, it’s made everything more about streaming and online shares and downloads — that sort of thing. It’s pretty hard and heavy to take, and it’s obviously very disappointing not to be able to showcase something brand new, especially with the new guys in the band and seeing them onstage. So, it’s taken all of that away.

Everything that comes up always gets pushed back. What’s circulating now, as far as for us in Houston, is that there’s nothing happening this year. Shows keep getting pushed back. It all depends on developments, I guess, and the vaccines.

I guess it’s getting that live dynamic back. For us, it feels very much like something is missing in our lives. It’s the lifestyle to be on the road and do these tours and perform. So, feel wholly incomplete. I look forward to finally interpreting these songs live and seeing that impact. It’ll be awesome, because so many people will know the songs by the end and be able to kind of sing along. I love doing meet-and-greets and hanging out after the show and hearing people’s real-life stories of what they doing and how the songs help them through different experiences.

On what she’s been doing to stay occupied on quarantine

I’m already working on a new album. I’m already writing on it quite a bit, and hopefully we’ll get back on the road, but I don’t necessarily expect that. So, I’ve been working on new music, even though there’s just a new album out, but I can’t stay idle.

On whether Oceans of Slumber might release a new album next year, even though they just released a new set

I don’t see why not, unless the label kind of tells us otherwise. I would imagine that there’s no hang up given the state of affairs and that new stuff does better. We’re incredibly busy and incredibly eager to continue kind of expressing ourselves and making more music. So if, if the powers that be allow it, we’ll definitely have plenty of new music.

I felt like there was a place for me, but I didn’t feel like that place was undisputed. I guess to say I felt accepted seems, to me, like a yes or no. I was accepted, but corralled to a very distinct area and place. I felt there was a place for women, but maybe it got relegated to what I look like, or had to sound a certain way, like it either had to fit A, B or C. We didn’t fit into the mold of a female [fronted] band that people were used to, so it was, “We don’t know what to do with you.” People said, “Oh, you’re symphonic metal,” and I was like, “No, we aren’t.” We had this in-between of clean singing and a soulful thing, and people were kind of scratching their head and then being like, “Well, you don’t fit metal.” So, yes, women could be in metal, but you had to fit a mold.

I hope that I’m helping. I think that there are definitely more music-minded artists that portray their musicality first and foremost. It’s a thin line and it’s a difficult one to sort of balance because publicly, socially, so much of a woman’s sexuality is wanted. It’s like, what came first? My idea was not to be showcasing my sexuality just because society was telling me that’s what I needed to show. I think that’s the challenge. I want to first and foremost be taken seriously for my music. I hope that I kind of paved the way for other women to know that you don’t necessarily have to lead with your looks.

On inspiring young women to get into the music business

It’s been really awesome, and they’re not even that much younger than me. It’s nice to see that integration amongst girls of color and all girls, really. I’m not limited. I want them to keep that passion that they have even when they feel that there’s a bit of an opposition to that. It’s been awesome to hear from other women, and that, in turn, inspires me to do more. That kind of inspiration works best.

I would say explore everything and do what feels organic and feels authentic to you. Don’t really worry about trying to fit into the outlines of what these genres are. They’re all made up to begin with. They help categorize things for marketing purposes and otherwise, but it’s really about doing something different and expanding on how these influences inspire you. Don’t let anyone else tell you how you’re supposed to do something. Do it the way that you want to, because that’s how innovation happens, and that’s how new inspiration happens.

Our thanks to Cammie Gilbert for taking the time to speak with us for this month’s “Beyond the Boys’ Club” column. Pick up Oceans of Slumber’s new self-titled album here.