Billie Eilish and FINNEAS Perform Their Bond Theme “No Time to Die” on Fallon: Watch

The sister-brother musical duo also talk about working with Hans Zimmer, playing at the DNC, and more 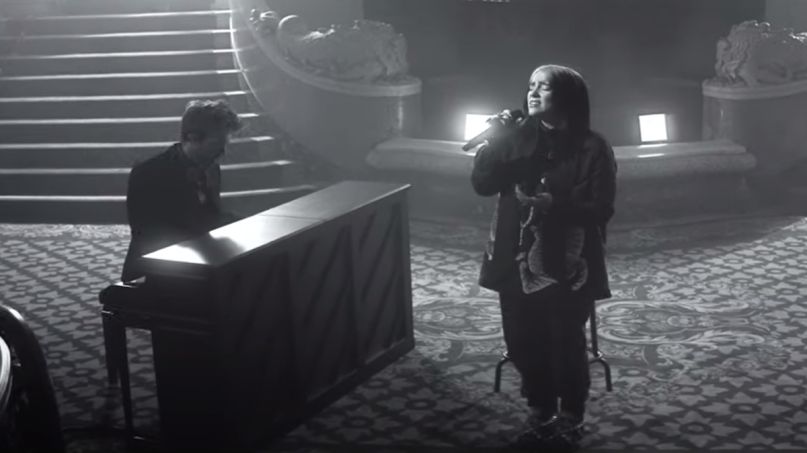 As the anniversary of the first Bond film, 1962’s Dr. No, October 5th was Global James Bond Day. That made yesterday the perfect time to promote the latest 007 movie, No Time to Die — if only had it not been delayed until 2021. You can’t shuffle late night schedules just because of a pesky pandemic, however, so Billie Eilish and FINNEAS still made a virtual stop on Fallon to perform their “No Time to Die” theme.

The siblings were shot in black-in-white for the performance, set up in an opulent entrance hall with a low-dangling chandelier. As FINNEAS played piano, Eilish delivered her trademark hushed vocals while sitting on a stool. That is until the emotion of the final verse brought her to her feet for a powerful finale. Check out the replay ahead.

Eilish and FINNEAS also Zoomed in with Fallon for a virtual interview. They discussed writing the theme, particularly what it was like working with Hans Zimmer and a full orchestra. Eilish also talked about her performance at the Democratic National Convention, and FINNEAS created a beat on the spot from samples of Fallon’s voice.

To round out Bond Day, 007 himself, Daniel Craig, also appeared on The Tonight Show. He revealed he’d never had a martini until he was cast in the role, and debuted an exclusive preview of No Time to Die. The film is now set for an April 2nd, 2021 release, so this is probably the last we’ll see of it for a few months.

Check out all the clips below.