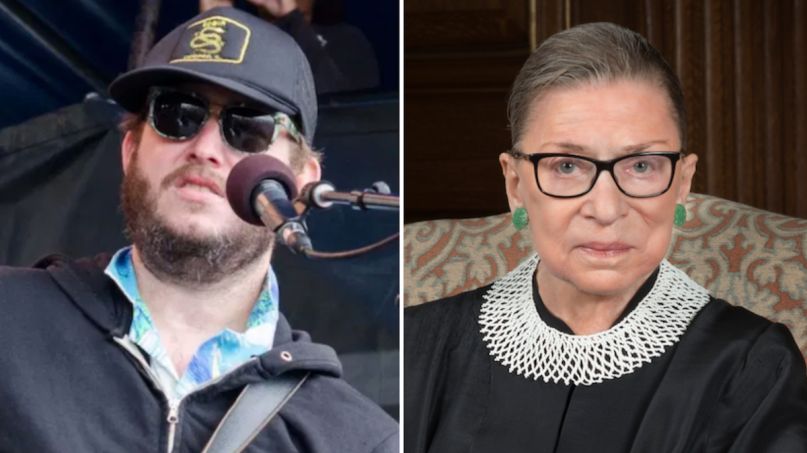 Ever the political advocator, Justin Vernon recently launched For Wisconsin, a get-out-the-vote initiative in his home state. As part of the registration drive, the Bon Iver frontman is hosting “A Visit with Vernon”, in which fans nominate a friend who is undecided about voting to have a conversation with Vernon. Video of the first visit has been revealed, and it includes the debut a new Bon Iver song dedicated to Ruth Bader Ginsburg.

Entitled “Your Honor”, the song came about shortly after RBG’s passing two weeks ago. Though Vernon said writing new music is something “I never do anymore,” he was compelled to recognize the late Supreme Court Justice’s legacy. “Times getting short and shorter/ Why waste your fine life?” he sings. “See, it’s already fostered in for ya/ Can’t you just feel for another?/ I implore ya.”

Vernon performed the song for two residents of Eaux Claires County, Wisconsin named Benny and Eric. The former had nominated the latter for “A Visit with Vernon” because he felt disenfranchised by the two-party system. “I lean more towards we need another party, or something more” explained Eric. “And what I keep getting told is that I’m wasting a vote.” Vernon encouraged him to vote anyway, saying everyone should speak their own mind rather than “put up a wall.”

You can watch the whole meeting below, with “Your Honor” coming in around the 4:36 mark.

It’s hard to know exactly what Vernon meant about not writing music anymore. He debuted “Things Behind Things Behind Things” at a Bernie Sanders virtual town hall in April, and just a few weeks later shared “PDLIF” as a COVID-19 relief benefit single. He also joined his Big Red Machine partner Aaron Dessner of The National and Michael Stipe for “No Time for Love Like Now”, guested on Taylor Swift’s folklore track “exile”, teamed with the likes of Bruce Springsteen and Jenny Lewis on “AUATC”, and hopped on Jim-E Stack’s latest single “Jeanie”. Yeah, he’s been having a real dry spell lately.