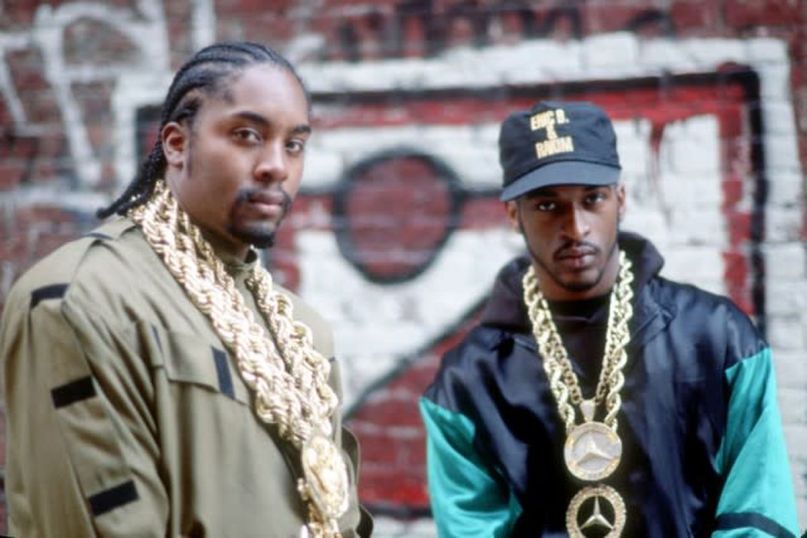 The Lowdown: Public Enemy’s Chuck D has long advocated that the history of Black music in America — from the blues and R&B to soul and hip-hop — is inextricably linked to the history of the Black community. To understand, for instance, the origins of hip-hop — its power to give a voice to the once voiceless and shine light on both the cultural richness and profound systemic suffering found in urban communities — is to know something vital about the Black experience in America. Candace McDuffie’s new book, 50 Rappers Who Changed the World, does a service to both the history of a genre and of a people by paying tribute to the game-changing emcees from rap’s earliest days right up through artists topping present-day charts.

The Good: As its title suggests, McDuffie covers 50 rappers (or groups) in her collection, each receiving a one-page profile on their career and contributions as an emcee as well as an illustrated portrait by artist Michele Rosenthal on the opposite page. McDuffie’s eclectic selection of emcees is the cornerstone of this compendium. Her subjects stretch across eras, genders, regions, and styles — from Run-DMC and MC Lyte to Cardi B and Kendrick Lamar — to show the true breadth and diversity that makes hip-hop and its history so rich. It’s a treasure trove for young hip-hop fans to be able to find all these names in one place and use these entries as a springboard to both discovering older acts and learning the influences of their own favorite contemporary rappers. Rosenthal’s artwork really punctuates the project as well. To see Snoop’s braids, Big Daddy Kane’s hi-top fade, or LL Cool J’s bucket hat reminds us of not only how iconic these faces have become, but also how critical hip-hop fashion and style have been to Black culture and its music.

The Bad: McDuffie’s book is best viewed as an educational tool. While hip-hop aficionados will enjoy the artwork and maybe even the debate over which emcees grace these pages and which ones didn’t quite make the cut, they’re not going to learn anything they didn’t already know about legends like A Tribe Called Quest, Tupac, or even Kanye West. That’s another book for another time and maybe one McDuffie could do down the line in the in-depth style of, say, Michael Azerrad’s Our Band Could Be Your Life. This collection should be taken for what it is, and that’s a great jumping-off point for any young music fan to begin learning about the voices who shaped (and continue to reshape) hip-hop — and just how rich and diverse that brother and sisterhood has always been. One minor criticism is that there doesn’t seem to be a guiding principle behind how these entries are ordered; this lack of structure feels like a missed opportunity to arrange or cluster artists in a manner that adds to the history lesson and allows readers to make meaningful connections between emcees.

The Verdict: 50 Rappers Who Changed the World is the type of gift that every hip-hop-loving uncle or aunt, father or mother, and older cousin should keep several copies of on hand to pass down to the young listeners in their lives. It’s instant access to a fascinating and storied history of art, culture, and struggle, packaged beautifully, and, most importantly, it’s the type of music book that makes the reader want to go out and listen to the bars, beats, and records that fill these pages.

About the Author: Candace McDuffie is a respected cultural critic and music journalist whose work focuses on the intersection of race, gender, and entertainment. Her articles have appeared in various publications, including Rolling Stone, MTV, Entertainment Weekly, Al Jazeera, Forbes, Glamour, Vibe, and NBC News. She is also a regular contributor to Consequence of Sound.

Pick up a copy of 50 Rappers Who Changed the World here… It’s out everywhere on October 27th.