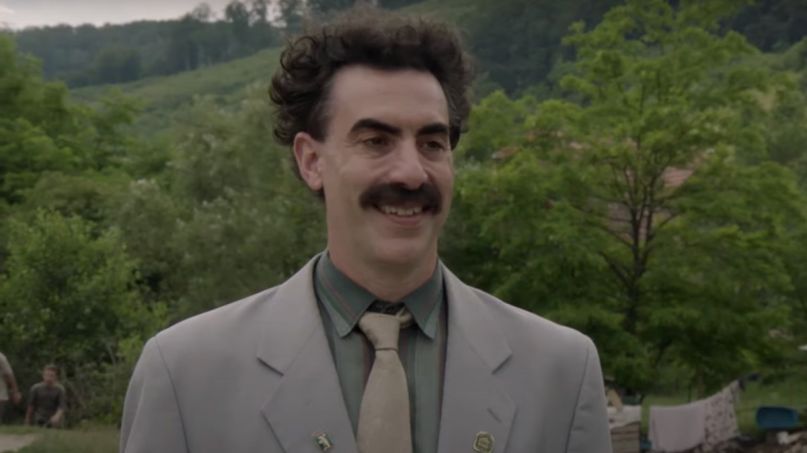 Sacha Baron Cohen has unveiled the first trailer for his long-awaited sequel to Borat. Officially titled Borat Subsequent Moviefilm: Delivery of Prodigious Bribe to American Regime For Make Benefit Once Glorious Nation of Kazakhstan, the film is set to premiere on Amazon Prime on October 23rd.

14 years after the events of the original Borat, the world-famous Kazakh journalist returns to Yankeeland to carry out a secret mission: to gift his daughter to Vice Premiere Mikhael Pence. However, upon his arrival to America, Borat finds the country under lockdown due to the pandemic. Additionally, his own celebrity makes it difficult for him to walk the streets unnoticed. Naturally, hilarity ensues.

As previously reported, Borat Subsequent Moviefilm was one of the first films to go into production once shutdown restrictions were eased. Cohen and his team shot the film discretely in various parts of the U.S. and internationally. Some scenes were apparently so “risky and dangerous,” Cohen was required to wear a bulletproof vest.

Cohen was reportedly determined to release the film prior to the election and sold the streaming rights to Amazon Prime, which will premiere it on October 23rd. Unfortunately, it seems Amazon’s lawyers had a say in the final title for the film, as its previously reported name — Borat: Gift of Pornographic Monkey to Vice Premiere Mikhael Pence to Make Benefit Recently Diminished Nation of Kazakhstan — has been altered a bit. Still, new Borat! I’m very excite.