Borat’s Daughter Infiltrated the White House Thanks to OAN 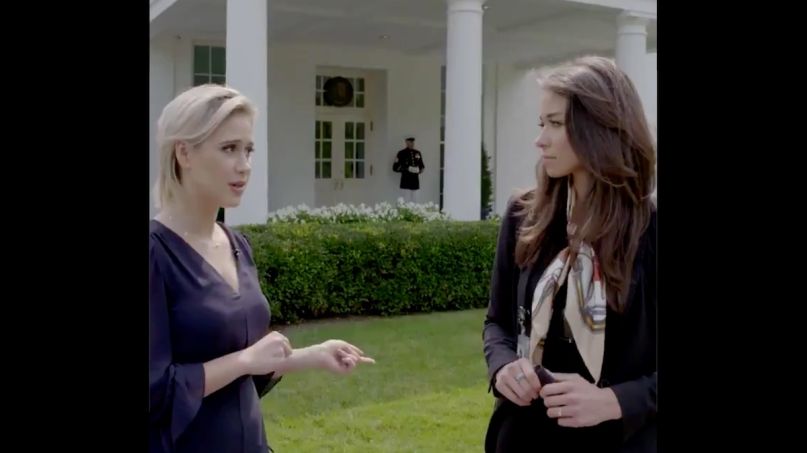 Borat pranked every corner of Donald Trump’s regime in his new subsequent moviefilm, including capturing Rudy Giuliani red handed during “innocent sexy-time.” Now, he’s shared a new viral video in which his “15-year-old daughter” infiltrates the White House thanks to a vapid OAN reporter.

“Trump very careful who he let into his events and house,” Borat tweeted when sharing the video. “No Covid test necessary — High 5!”

In the clip, which does not appear in the film, Borat’s “daughter” Tutar (played by 24-year-old Bulgarian actress Maria Bakalova) pretends to job-shadow OAN White House correspondent Chanel Rion as she guides her through the White House. The date listed is September 20th, which was mere days before Trump tested positive for COVID-19. At one point, Tutar appears in the same room as Trump — and no one is wearing masks.

The footage also includes a shot of Rion asking Trump if he thinks “Chinese food” is a racist term, a bashful Tutar nervously introducing herself to Donald Trump Jr., and a brilliant exchange between Tutar and Rion on the White House lawn. “Why are all the fake journalists on the Left and not the Right?” she asks. Perhaps unsurprisingly, Rion has no response.

“They take my daughter into White House,” narrates Borat. “No need for security check or cover masks!” Watch the full video below.

As Borat also managed to sneak into the same room as Mike Pence (while dressed as Trump, no less), it really makes you wonder who is handling security at the White House.

Trump very careful who he let into his events and house. No Covid test necessary – High 5! pic.twitter.com/Kf5gGk3n2M