He also gives a shoutout to Lana Del Rey and discusses being the last member of his original band, The Castiles 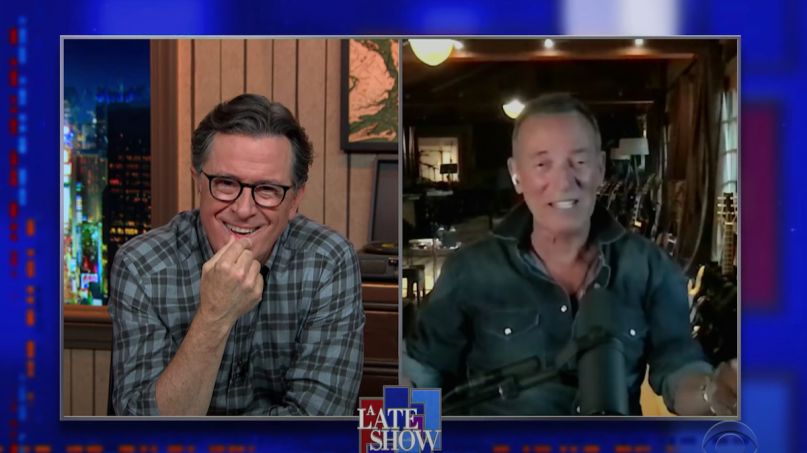 Stephen Colbert and Bruce Springsteen on A Late Show

Bruce Springsteen is just one day away from releasing his new album, Letter to You. Ahead of its release, the Boss appeared on Wednesday night’s Late Show with Stephen Colbert to talk about the inspiration behind the record, putting it out during a pandemic, and his favorite Bob Dylan songs, among other topics.

After joking about not being able to take Letter to You on the road (“I do a lot of work in front of my bedroom mirror with the tennis racket… I go for three hours, just like the show”), Springsteen spoke extensively about its creation. He said the album only took seven days to write and four to record, and was largely inspired by the loss of his old friend George Theiss, the last surviving member of Springsteen’s original band, The Castiles.

“I guess being the last guy in my first band to remain alive sort of, I dunno, must’ve brought things up for me,” he said. “Because a short while later I started to write with the themes of mortality and lifespan, and taking a subject — music, which is a subject I hadn’t written about before. What it was like being in a band when you were young, what it’s like being in a band 50 years later with the same people.”

That was in reference, of course, to the E Street Band. “Steve[n Van Zandt] goes back to when I was 16. Garry [Tallent], 18. These guys were there for a long, long time,” Springsteen said with reverence. “I always tell people, I say, ‘Imagine this, the people you’re going to high school [with] right now, when you’re 70 years old, those are the exact people you’ll be working with, and will have worked with them for the past 50 years.’ The only place that that happens is in rock’n’roll.”

While most of Letter to You was written following the passing of Theiss, three tracks actually come from before Springsteen’s 1973 debut (and our 8th favorite Springsteen album), Greetings from Asbury Park, N.J. “They were a lot of fun, because I don’t write lyrics like that anymore and I love that writing style, and I wish I hadn’t abandoned it so soon,” the Boss revealed. “But I was very self-conscious about the Dylan comparisons, and so I moved away from it rather quickly. But looking back on it, I kind of had my own Dylan-esque style that was a lot of fun.”

Speaking of Bob Dylan, Colbert then asked Springsteen to name his top three songs by The Bard. He listed “Like a Rolling Stone”, “Visions of Johanna”, and “Ring Them Bells”, and then said his favorite Dylan lyric came from the first one: “Once upon a time you dressed so fine/ Threw the bums a dime in your prime, didn’t you?”

As the interview wound down, Springsteen gave yet another shout out to Lana Del Rey, saying one of the last albums he’d listened to all the way through was Norman Fucking Rockwell!. This set Colbert shouting about his own love for the song “The Greatest”. “I just love her writing,” said Bruce. “It’s cinematic, and her narratives great.”

Elsewhere, Springsteen laughed about getting his own emoji, talked about the last time he listened to Born to Run, and touched on the recent loss of John Prine. He also played the interview out with a little bit of the Letter to You track “Last Man Standing” — before forgetting the lyrics.

Watch the whole interview below. Letter to You arrives Friday, October 23rd. Its companion documentary of the same name is out today via Apple TV+.