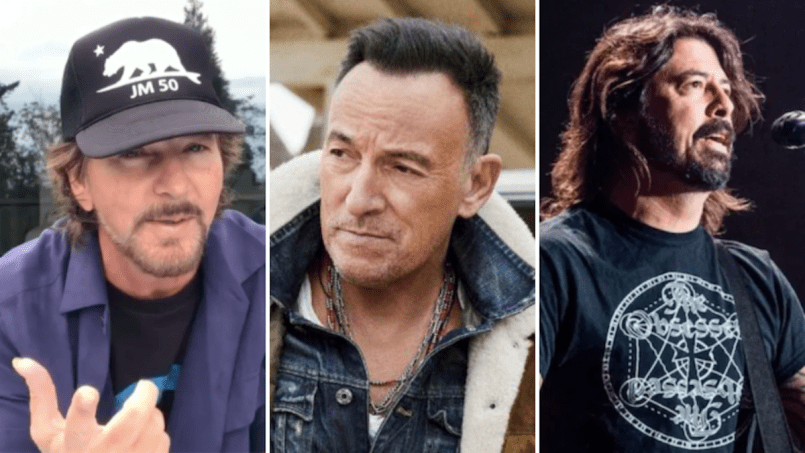 In the run-up to his new album Letter to You, Bruce Springsteen is hosting a five-episode radio series for Apple Music called Letter to You Radio. Eddie Vedder and Dave Grohl joined The Boss on the most recent episode, and together the rock veterans discussed key moments in their respective careers, what those first few breaks felt like, and the brotherhood of bands.

Springsteen spoke to the Pearl Jam frontman first. He wanted to know about the Seattle grunge scene, because “we didn’t come out of a scene with a lot of peers. We were a one-shot out of Asbury Park.” To Springsteen, his own success seemed utterly unexpected, whereas Pearl Jam always felt inevitable. Springsteen said, “You had the kind of band that simply was a big, powerful band with a reach that wanted to extend to a sizeable audience. I mean, it was just in the nature of your music. I don’t know if you feel like that or not, but that’s how it looked from my vantage point from the outside.”

The Grunge God stayed true to his nice-guy reputation, and for long stretches he asked so many questions that you might have forgotten who was the host and who the guest. Vedder questioned Springsteen about his unusual experience with the Nebraska demos, since for that album Springsteen famously recorded the demos, tried to re-record with the band, and found that the magic had gone. The Boss told a less-familiar story, about how the shitty boombox he used to capture the demos actually altered the sound. “The beat boxes, they’re really not very accurate and they run fast and run slow,” he said. This particular machine ran fast. He explained,

“The beat box…was running fast, which means when you played the tape back, it came out slow. And that had an enormous amount to do with the sound of Nebraska. Nebraska in its entirety is slowed down from its actual recording pitch. It had a lot to do with some of the darkness of the record because I did go in the studio and try to both re-record it, remix it. And every time I did, I made it worse. When I brought the pitch up to where it should actually be, it brightened a record up and took away a lot of its mysteriousness. So Nebraska was this totally haphazard, happy accident that occurred over a few weeks with just whatever equipment we had laying around and the whole record cost us, including the price of the tape, it cost us about a thousand dollars to make.”

This role-reversal didn’t happen with Springsteen’s other guest. Longtime Foo Fighters fans know that while Dave Grohl is a pretty humble dude, he is also quite the talker. The first Foo told a story about realizing that a “skinny, nerdy” kid like himself could become a rock star. It happened at Chicago’s Cubby Bear, a venue that in recent years has become the go-to spot for all-white bands who think they could be the next Parliament. But in the 1980s, it was “a hole in the wall,” where you could see some ripping punk.

Grohl said, “I saw this Chicago punk rock band, and then, I had that Ramones moment, where a lot of people saw the Ramones, and they were like, ‘Oh my God, it’s three chords, man. And the songs are two and a half minutes long.’ It’s like, this is not ELO. This is not Genesis.” Suddenly, rock and roll seemed accessible.

One thing this episode of radio especially affirms is that lots of rockers have an easy time shooting the shit, in part because of their shared experiences. As Grohl explained, that conditioning starts with the first gig. “Maybe it’s the corner bar,” he explained. “Then you get a gig in Baltimore, so now you’ve got to drive. So, what are you going to get in? All of you are going to pile in some shitty, old van, and you got your sleeping bags, and you’re sleeping on floors, and you’re eating corn dogs, and you’re just trying to get enough gas money to get to the next city. And you’ve been there, everyone’s been there.”

The whole interview is laid back and informative, and you can listen to some clips below. The full episode is available on Apple Music.

Letter to You drops this Friday, October 23rd. Springsteen has also authorized a Letter to You documentary for Apple TV+, which arrives the same day.

The Foo Fighters are also working on a new album, which Grohl has called their version of David Bowie’s Let’s Dance. Grohl busted out the drum kit earlier this month to accompany Stevie Nicks on her latest single “Show Them the Way”. For Eddie Vedder’s part, Pearl Jam released the excellent album Gigaton earlier this year. He recently joined Instagram to teach people how to vote by mail, and released the new instrumental single “Cartography”.