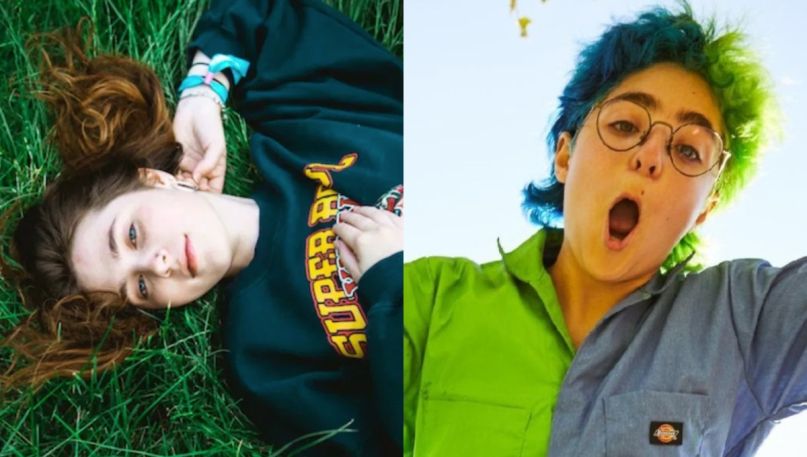 Since releasing last year’s stellar debut album Immunity, Clairo has preoccupied herself with a series of collaborations. Our former Artist of the Month has linked up with producers A. G. Cook and Mura Masa, as well as futurist pop queen Charli XCX and rising songwriter Arlo Parks. Now, Clairo is taking her collaborative spirit a step further by forming a new band called Shelly.

The outfit pairs Clairo with Claud (they/them), a Brooklyn-based indie pop artist who also just so happens to be the first act signed to Phoebe Bridgers’ Saddest Factory label. Shelly are rounded out by Clairo’s two old friends from Syracuse, Josh Mehling and Noa Frances Getzug.

To coincide with today’s announcement, Shelly are sharing their debut songs “Steeeam” and “Natural”. Both continue the bedroom pop narrative Clairo first began on her first full-length, but there also seems to be more emphasis on dream pop/shoegaze guitars. Think Clairo meets Beach Fossils and Wild Nothing.

“my best friends and i made a band and put out an A/B side- ‘Steeeam’ and ‘Natural’ 🎸,” Clairo wrote on Instagram. “we created everything during quarantine in LA, Chicago, Houston and Atlanta. hope you check it & enjoy.” Stream the two tracks down below.

For more Clairo, she just covered The Strokes tune “I’ll Try Anything Once”. Claud, meanwhile, dropped their debut single for Saddest Factory, “Gold”, earlier this month.

👩‍💻 my best friends and i made a band and put out an A/B side- 'Steeeam' and 'Natural' 🎸 we created everything during quarantine in LA, Chicago, Houston and Atlanta. hope you check it & enjoy 🥳

Previous Story
Grab a Napkin (or a Hose) the McRib is Back
Next Story
Ariana Grande’s Positions Is a 2020 Pop Fairytale: Review
Popular
More Stories
[fu-upload-form form_layout="media" title="Submit Your Photo"][input type="hidden" name="ugc" value="1"][/fu-upload-form]