"It's easy to bully people. That does not make you a tough guy." 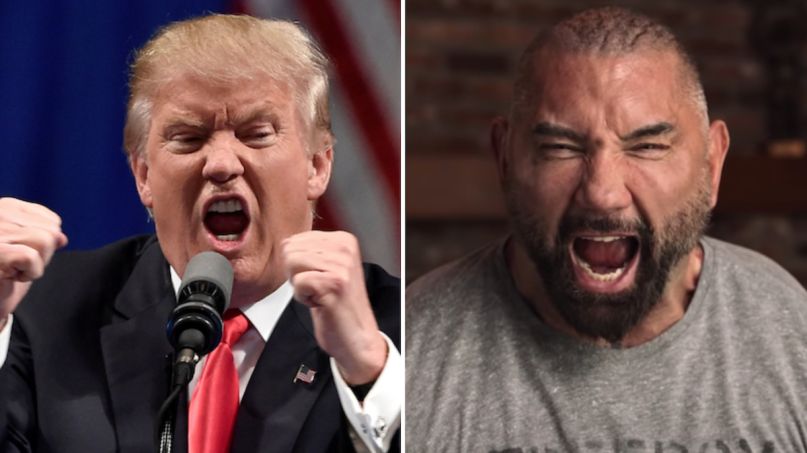 It’s no secret that Joe Biden has outraised the incumbent candidate considerably over the last few month. The surge in funds has led to a major uptick in advertising; just check out how many new ads get uploaded to Biden’s YouTube page daily. Many of those spots feature celebrities like Brad Pitt, Samuel L. Jackson, Sam Elliott, and Beastie Boys lending their voices to the cause. The latest A-lister to join the Biden train is none other than Drax the Destroyer himself, Dave Bautista.

The former WWE star appears in a new ad called “That’s Toughness”. In the clip, Bautista wears a “Freedom” shirt while he explains the difference between acting like a tough guy and actually being one.

After sharing the ad online, Bautista’s Stuber co-star Kumail Nanjiani voiced his support for the message. “Yes @DaveBautista! This ad is awesome,” Nanjiani tweeted. “You convinced me. I’m definitely voting for Biden/Harris now. Or two weeks ago, when I voted.”

Watch Bautista’s Biden ad below, and find out all you need to know about how to vote here.

While some celebs are appearing in Biden’s ads, others are taking part in virtual fundraising events or publicly endorsing the former Vice President. In recent weeks, Foo Fighters, Mel Brooks, Fiona Apple, the cast of Marvel’s Avengers, Dwayne Johnson, Taylor Swift, and many more have all come out to support the Democratic presidential candidate in one way or another.

Yes @DaveBautista! This ad is awesome. You convinced me. I'm definitely voting for Biden/Harris now. Or two weeks ago, when I voted. https://t.co/ZfWAgG92zg