The Foo Fighters frontman is the new spokesman for FreshPotix 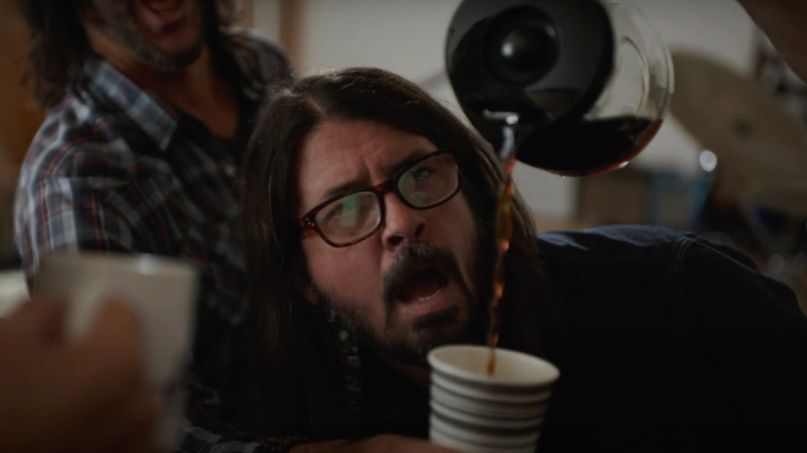 Ten years ago, while recording with Them Crooked Vultures, Dave Grohl shined a light on his crippling coffee addiction with a satirical video titled “FRESH POTS!”  Now, a decade later, the Foo Fighters frontman has released a follow-up video which doubles as a faux advertisement for a prescription drug dubbed, “FreshPotix”.

As Grohl narrates to begin the video, “Ten years ago, I was in the grips of a debilitating caffeine addiction. My ability to maintain personal relationships and solid bowel movements were compromised by crippling sleep depravation and noxious coffee breath. As the bean took over, I found myself doing anything for a fix. My roast grew darker and darker — until I finally hit pot bottom.”

Fortunately for Grohl, he found a cure for his addiction (and his awful coffee puns) with “FreshPotix”. The drug is not without side effects, however. Spoofing real-life prescription drug commercials, Grohl’s “FreshPotix” ad goes on to list all the various side effects, from “Severe Monkey Peen” and “Violent Fits of Rage Towards Left-Handed People” to “Nose Chickens” and “Oxford Commas”.

“With FreshPotix, Grohl adds, “I no longer have to shoplift or sell my body for that fantastic buzz that kept me awake for 36 hours at a time and sent me to the hospital for a CAT scan and psychotic evaluation” (which did in fact actually happen).

Watch Grohl’s “FreshPotix” ad and the original “FRESH POTS!” bit below. I’m just going to go ahead and say it: Dave Grohl, future host of SNL. Make it happen.

It’s no wonder Grohl’s been drinking so much coffee as of late. Even amidst the pandemic, he and the rest of Foo Fighters have kept busy with a string of high-profile live performances, including gigs at #SOSFest, Tom Petty’s 70th birthday bash, and a virtual benefit concert for Joe Biden.