"I do make mistakes ... no offense intended" 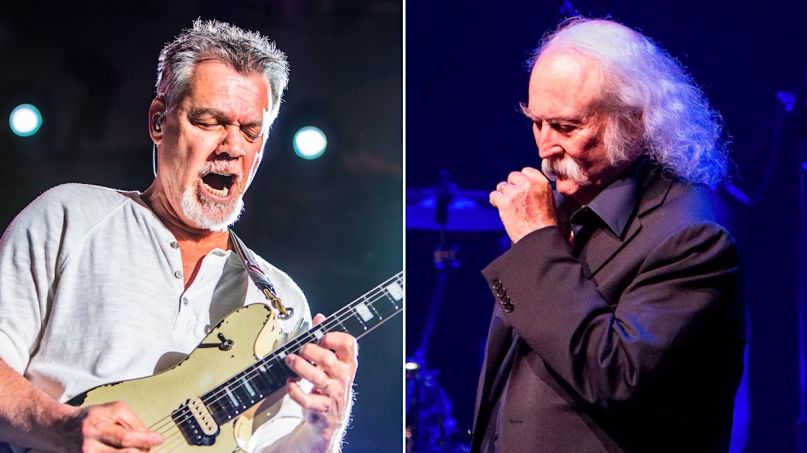 David Crosby’s one-word tweet about the late Eddie Van Halen over the weekend landed him in an ocean of hot water. Now, the veteran folk rocker insists he would’ve given a more tasteful answer had he remembered that the guitar virtuoso just died.

As previously reported, when asked by a fan what he thought of the Van Halen guitarist on Saturday (October 10th), Crosby simply replied, “Meh.” After receiving backlash, he doubled up on his initial response by saying, “Sorry … just meant he does not move me much.” He then went on to dig himself further into a hole by tweeting, “Look I get it … many of you loved Van Halen …. and the one time I met he was nice … and he was talented … meh to me means I don’t care that much … and I don’t … doesn’t mean he wasn’t good, he was but not for me.”

On Tuesday (October 13th), Crosby addressed the backlash by tweeting, “Yes you Van Halen fans I did just toss off an answer that was not cool …the even more embarrassing truth is … I didn’t even remember he had just died or I would have kept my mouth shut….I do make mistakes …no offense intended.”

Eddie Van Halen passed away from cancer on October 6th, just four days before Crosby’s initial “meh” tweet. The Van Halen guitarist’s death was by far the biggest music-related story of the week, and it’s hard to imagine someone as active on Twitter as Crosby forgetting that “he had just died.” Even if he thought a fan was just randomly asking about the Van Halen legend, the “meh” answer still seemed rather curt.

It also can be construed that the Crosby, Stills & Nash musician had remembered that the guitarist had died by Sunday when he acknowledged that “many of you loved Van Halen” and “he was talented.”

Crosby’s questionable tweets came amidst an outpouring of love from dozens of Eddie Van Halen’s fellow musicians. See his explanation in the tweet below.

yes you Van Halen fans I did just toss off an answer that was not cool …the even more embarrassing truth is ..I didn't even remember he had just died or I would have kept my mouth shut….I do make mistakes …no offense intended