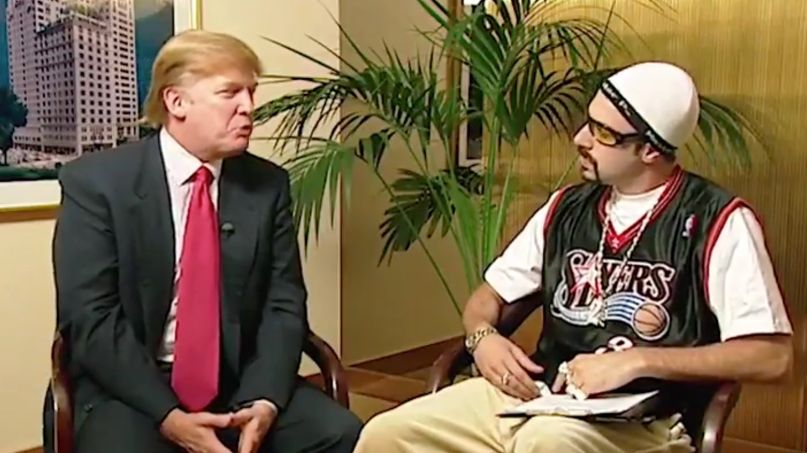 “Creep” would be an appropriate word to describe Rudy Giuliani after witnessing his antics in the new Borat movie. However, when asked about his personal attorney’s actions in the film, Donald Trump said it was Sacha Baron Cohen who was the “creep.”

Speaking to reporters on Friday, Trump recalled his own appearance on Cohen’s Da Ali G Show in 2003. “Years ago, you know, he tried to scam me,” And I was the only one who said ‘no way.'”

On Saturday, Cohen responded to Trump directly. “Donald—I appreciate the free publicity for Borat! I admit, I don’t find you funny either. But yet the whole world laughs at you,” Cohen wrote on Twitter. “I’m always looking for people to play racist buffoons, and you’ll need a job after Jan. 20. Let’s talk!”

In Borat Subsequent Moviefilm, 24-year-old actress Maria Bakalova, playing the role of Borat’s 15-year-old daughter Tutar Sagdiyev, sits down for an interview with Giuliani in a New York City hotel room. After she gins him up with a series of compliments and red meat questions related to China, she invites Giuliani into the next room for a drink.

Giuliani can be heard telling Tutar to “come here” as they enter the adjacent bedroom (which has been rigged with hidden cameras). He then sits on the bed and asks for her phone number and address, and begins touching her back. At this point, Tutar untucks Giuliani’s shirt and removes his microphone. Giuliani responds by laying on his back. He then puts his hands down his pants for several seconds.

In an interview earlier this week, Giuliani denied he did anything inappropriate, claiming the clip was “doctored” and “a totally sensationalized false account.” Instead of touching himself inappropriately or hitting on an underage girl, the former New York City mayor said he was simply tucking in his shirt after removing his microphone.

Cohen responded to Giuliani’s comments during his own appearance on Good Morning America on Friday. “If the president’s lawyer found what he did there to be appropriate behavior, then heaven knows what he’s done with other female journalists in hotel rooms,” Cohen remarked. “I just urge everyone to watch the movie… it is what it is, he did what he did. Make your own mind to us, but it was pretty clear to us.”

Donald—I appreciate the free publicity for Borat! I admit, I don’t find you funny either. But yet the whole world laughs at you.