50 Cent now says he "never liked" Trump, ditching him in favor of "another spin" with ex-girlfriend Chelsea Handler 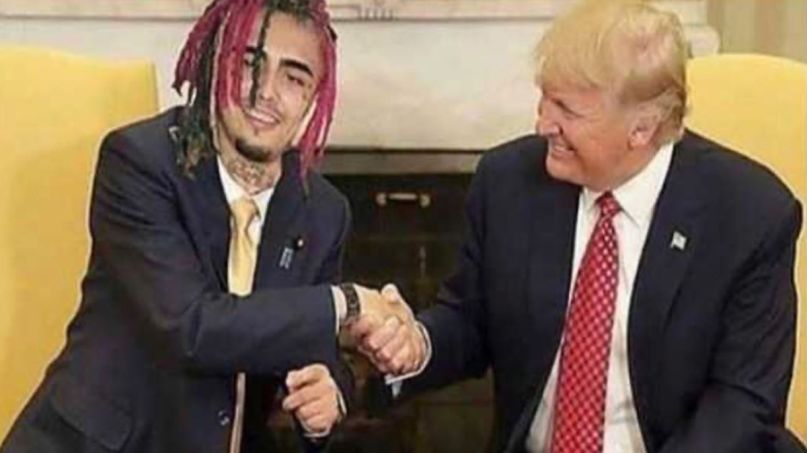 We’re just over a week away from the election; if you truly don’t know who you’re voting for yet, there’s probably not a lot that can be said to convince you one way or another. But if for some reason what millionaire rappers think might sway you, consider this: Lil Pump has now endorsed Donald Trump, just as former champion 50 Cent has jumped off the bandwagon.

Lil Pump made his political allegiance known in a pair of Instagram posts. One featured the rapper’s face photoshopped into a picture of someone shaking Trump’s hand. “THE DAY I MET TRUMP,” read the caption, along with the gobbledygook hashtag #trump202022020.

In a since-deleted follow-up video, the Harvard Dropout rapper made clear his stance was based on the same misleading tax numbers 50 Cent used in his own endorsement of the current administration. “Fuck I look like payin’ an extra 33 in tax for Biden, bitch ass n*gga? Fuck Sleepy Joe, n*gga! Trump 2020, bitch,” he yelled in the clip.

Again, Biden’s tax plan would effectively raise the federal income tax for the top 1% from 26.8% to 39.8%, and the numbers 50 were harping on weren’t taking into account deductions, credits, and other offsets. The “In Da Club” rapper was also only talking about his total taxes once he paid New York state and New York City taxes, not just those in a potential Biden plan. (For what it’s worth, Lil Pump lives in Miami.)

All that said, 50 Cent seems to have gotten off the Trump Train pretty much as soon as he got on. His ex-girlfriend, Chelsea Handler, rather indelicately (and racist-ly) admonished him during a recent appearance on The Tonight Show Starring Jimmy Fallon. She said,

“I had to remind him that he was a Black person, so he can’t vote for Donald Trump, and that he shouldn’t be influencing an entire swath of people who may listen to him because he’s worried about his own personal pocketbook… I’m willing to seal the deal in more ways than one if he changes his mind and publicly denounces Donald Trump. I might be willing to for another spin, if you know what I’m talking about.”

The chance for “another spin” was apparently enough for 50 Cent to backtrack. “F*ck Donald Trump, I never liked him,” he tweeted while sharing video of Handler’s Fallon interview. “For all I know he had me set up and had my friend Angel Fernandez killed but that’s history. LOL.”

👀a what, 😳another spin 💫Fu*k Donald Trump, I never liked him. 🤨for all I know he had me set up and had my friend Angel Fernandez killed but that’s history. LOL @chelseahandler @jimmyfallon pic.twitter.com/Tya6EqDBFt