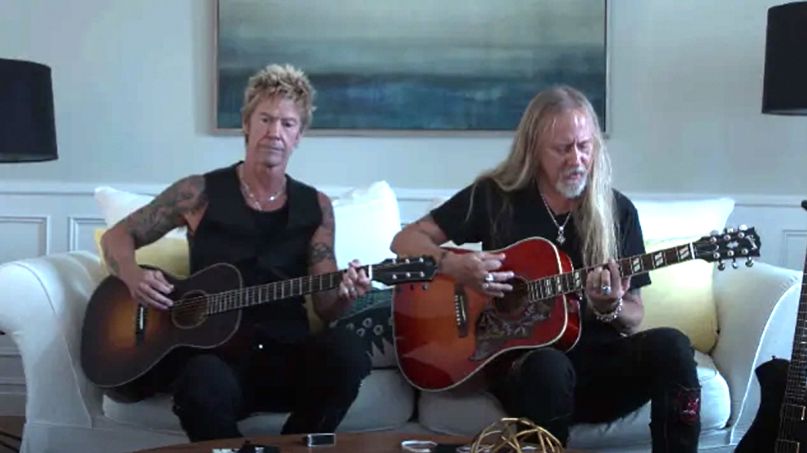 Guns N’ Roses bassist Duff McKagan and Alice in Chains guitarist-singer Jerry Cantrell have teamed up for an acoustic performance in tribute to former U.S. president Jimmy Carter, who turned 96 on October 1st.

The two rock legends played a cover of “A Satisfied Mind”, penned by Joe “Red” Hayes and Jack Rhodes, while sitting on the couch. It’s a peaceful and serene rendition of the song, and a worthy cover choice for the longest-living president.

“We want to say happy birthday to Jimmy Carter,” McKagan said in the video’s introduction, going on to address Carter directly. “We’re here for a couple reasons … how strongly you fought for arts in school. We were exactly the right age.”

“Beneficiaries for sure,” Cantrell added. “Almost half my classes were arts. When I graduated, they kind of went away.”

The GN’R rocker also mentioned Carter’s initiative of growing of Empress (Paulownia) trees. It happens to be the same wood out of which the guitar Duff plays in the video was made.

The cover also makes us realize how much we miss Jerry Cantrell’s acoustic-based material. Last year, the guitarist played a pair of low-key solo shows with vocalist Greg Puciato and other guests prior to the pandemic, hinting that he might be preparing a third solo album or tour.

In other related band news, Alice in Chains are celebrating the 30th anniversary of Facelift with a long-awaited vinyl reissue out on November 13th. Meanwhile, Guns N’ Roses’ Greatest Hits made its vinyl debut last month.

Watch McKagan and Cantrell’s tribute to Jimmy Carter below.