Van Halen had been battling throat cancer for several years 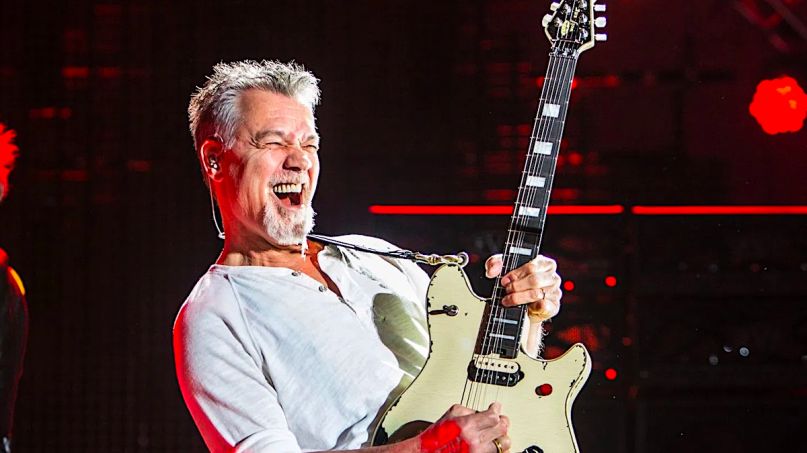 According to TMZ, Van Halen passed away Tuesday (October 6th) at St. Johns Hospital in Santa Monica, California. The Rock and Roll Hall of Famer was reportedly surrounded by his son, Wolfgang, his brother Alex, and his wife, Janie. Apparently, Eddie’s throat cancer had spread to other parts of his body, and his health took a critical turn for the worse over the past three days.

Wolfgang confirmed the tragic news via Instagram, writing the following: “I can’t believe I’m having to write this, but my father, Edward Lodewijk Van Halen, has lost his long and arduous battle with cancer this morning. He was the best father I could ever ask for. Every moment I’ve shared with him on and off stage was a gift. My heart is broken and I don’t think I’ll ever fully recover from this loss. I love you so much, Pop.”

Edward Lodewjk Van Halen was born to Jan and Eugenia van Halen, on January 26th, 1955, in Nijmegen, Netherlands. The family, including elder brother Alex, moved to Pasadena, California, in 1962. With a father who played piano, saxophone, and clarinet, the brothers had the privilege of growing up in a musical household. He wasn’t shredding or even picking any guitars at first, though.

Had things gone a different way, Van Halen might have become known for being a classical pianist. He and his brother took lessons from Stass Kalvitis, an older Russian instructor, and it seemed the younger Van Halen was a piano prodigy. He won first prize four years in a row at Long Beach City College’s yearly contest. However, as good as he was at piano, Van Halen wasn’t finding the creative fulfillment he needed from it. As youths in the 1960s, the Van Halens were interested in something called “rock ‘n’ roll.”

Entranced by the likes of the Dave Clark Five, Van Halen and his brother started learning rock instruments, with Eddie on drums and Alex on guitar, before it was decided they’d be better off switching. Even before Van Halen was officially formed, the brothers performed in multiple bands together, under names such as The Broken Combs and The Trojan Rubber Company.

As much as Van Halen loved playing guitar, he disdained doing lead vocals for the band, then known as Mammoth. He and his brother hired David Lee Roth, who they had rented a PA system from, for the gig. Rounding out the lineup was Michael Anthony of Snake on bass.

Mammoth started making serious noise in the Los Angeles music scene. In fact, Van Halen’s guitar, played through his famed Marshall amplifier, was so notoriously loud that some venues turned them down because his amp necessitated being turned up all the way to 10. Concessions were made, such as muffling or turning the amp away. Giving audiences a chance to see them in action was worth the adjustments, especially with Eddie on guitar.

Although Van Halen wasn’t the first guitarist to employ tapping techniques, his proficiency in the methods was stunning. His brother and Roth advised him to tone down on the virtuosity onstage, as there could’ve been other guitarists in the area who might be watching to steal his tricks. Another wise suggestion came at the behest of Roth: change the band’s name to Van Halen.

They recorded their first demo with Gene Simmons, but it was the second track on their self-titled debut album, released in 1978, that really helped Van Halen catch fire. In terms of star-making power, “Eruption” was exactly that. The star in question wasn’t Lee Roth, as the track, less than two minutes long, was completely vocal-less. Rather, it was Eddie Van Halen, whose furious tapping and potent melodies were enough to make innumerable fans want to start saving for an electric guitar of their own. Guitar World Magazine even named it as the second best guitar solo of all time after “Stairway to Heaven”.

Other popular songs on Van Halen included opener and “Eruption” A-side “Runnin’ with the Devil” and “Ain’t Talkin’ Bout Love”. Their mesh of hard rock and heavy metal helped them to climb the charts throughout the 1980s, with Eddie being a definitive “rock” of the band. Even when they shifted into a glitzier direction, like with the enormously popular 1984, featuring hits such as “Jump” and “Panama”, their guitarist couldn’t go unnoticed. He also began employing keyboards, no doubt well-served by his training as a child.

It wasn’t just rock circles that adored Van Halen’s guitar work. He was chosen by Quincy Jones to record a solo for what became one of the biggest songs of all time: Michael Jackson’s “Beat It”. In 1980, Van Halen found a fan in another celebrity: actress Valerie Bertinelli, who he married the following year. Bertinelli gave birth to their son, Wolfgang, otherwise known as “Wolfie”, in 1991. The pair divorced in 2005. Van Halen later wed Janie Liszewski, an actress, stuntperson, and Van Halen’s publicist.

Van Halen, both Eddie and the eponymous band, went through many changes over the years. Unrest between Roth and other members led to his departure from the group. In 1985, he was replaced by Sammy Hagar, who later left the band in 1996. An abbreviated short reunion with Roth came that same year, as did the joining of Gary Cherone of Extreme as lead singer. Following the disappointing response to Van Halen III, the only album recorded with Cherone, the band went on hiatus, with Cherone out of the picture for good, despite an amicable split.

In the early 2000s, the band got back together with Hagar. While the Summer 2004 was a financial success, it didn’t quell Van Halen’s reputation for inter-band conflict. Eddie’s alcoholism, which he had unsuccessfully received treatment for in 1990, was causing major issues. Hagar left the band for the final time in 2005, and the band got back together with Roth, releasing their first album together in more than two decades, A Different Kind of Truth, in 2012. It also helped them become more of a family unit, with Wolfgang Van Halen taking over for Michael Anthony on bass.

Speaking in 2015 to Chuck Klosterman for a Billboard interview, Van Halen talked about how he used substances for functioning purposes:

“Alcohol and cocaine were private things to me. I would use them for work. The blow keeps you awake and the alcohol lowers your inhibitions. I’m sure there were musical things I would not have attempted were I not in that mental state.”

He was able to make sobriety stick in 2008. He had also quit smoking cigarettes, having one-third of his tongue removed due to cancer treatment. In 2002, he was declared free of tongue cancer.

However, in 2019, it was reported that Eddie had been battling throat cancer for the past five years. Around the same time, David Lee Roth suggested that Van Halen were finished as a band, and this past summer, the singer cast doubt on whether Eddie would ever tour again.

Since news of Eddie’s death broke, tributes have been pouring in from countless musicians and celebrities. David Lee Roth, along with Eddie’s recent and former Van Halen bandmates, honored the guitarist via social media, as have a slew of fellow guitar icons.

Eddie Van Halen is survived by his wife, Janie Liszewski, whom he married in 2009 and his son, Wolfgang, born in 1991.

I can’t believe I’m having to write this, but my father, Edward Lodewijk Van Halen, has lost his long and arduous battle with cancer this morning. He was the best father I could ever ask for. Every moment I’ve shared with him on and off stage was a gift. My heart is broken and I don’t think I’ll ever fully recover from this loss. I love you so much, Pop.