Why Everyone Is Becoming a BTS Fan in 2020

The K-Pop juggernaut have brought joy, hope, and light to one of the darkest years in memory 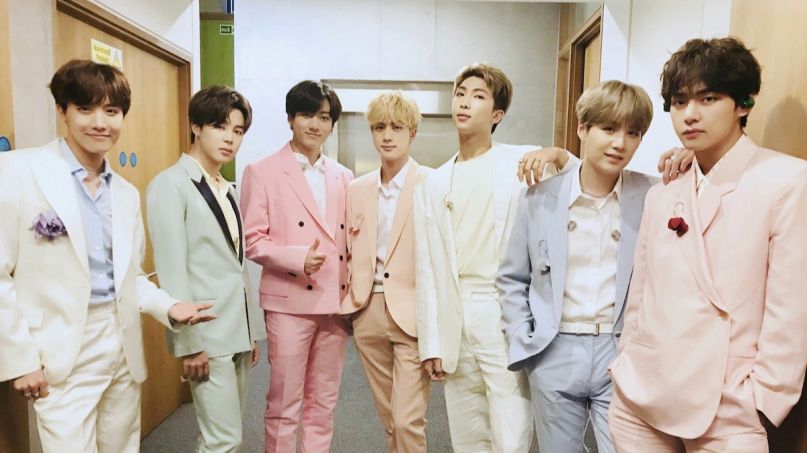 If you’re not familiar with K-Pop global crossover sensation BTS, congratulations to you and your presumably peaceful life without the internet. Here’s the rundown: since their debut seven years ago, the group known as BTS (made up of members RM, Jin, SUGA, J-Hope, Jimin, V, and Jungkook) have broken countless records, successfully tapped into worldwide markets no act has ever captured before, and stolen the hearts of millions of devoted fans (this writer included). In August, BTS landed their latest comeback with the incendiary “Dynamite”, a track that has propelled the group to uncharted heights, including debuting at No. 1 on the Billboard Hot 100, remaining there for a second week and now returning for a third.

Over the past few months, in the bleak landscape of 2020, a specific and curious trend has emerged: BTS, already unfathomably successful, have absolutely exploded in popularity. I assumed there may have been a handful of people out there like me — otherwise casual fans who were pushed into the full spiral of standom by this time of isolation and stagnancy — but story after story from outlet after outlet has begun to emerge on the subject.

What is it about Bangtan Boys that people are so desperately clinging to these days? The common thread of the “overnight BTS stan” trend seems to be their gravitational pull as a source of joy, hope, and light, and the schedule tends to go something like this.

Since the arrival of “Dynamite”, new fans started to click through other performances on American programs, with a tentpole being the group’s appearance on SNL. In 2019, BTS made history as the first K-Pop group to perform on the seminal late-night show, heightening their relevance in America dramatically. While most of the attention that week leading up to the show was put on the people sleeping on the sidewalk or hordes of fans camped outside of 30 Rock, the performances that evening lived up to the hype. One of the most remarkable things about the group’s appearance on SNL was how uncompromising it was: the boys sang in Korean, as they always have, and in doing so brought a new truth to the idea that music is a universal language. Their choreography, charisma, and stage presence exploded from Studio 8H, quickly making their musical spots the most-watched SNL performances uploaded to YouTube. (Speaking of which, why were those performances removed from SNL’s page? Hello, BigHit Entertainment, it’s me again — I just have a quick question for you.)

If SNL isn’t the gateway, there’s a strong chance that an appearance on another American show may have done the trick: the BTS episode of Carpool Karaoke on The Late Late Show with James Corden is 16 minutes of pure joy. The early morning performance of “ON” in an empty Grand Central Station for The Tonight Show is heart-stopping. Whatever the initial curiosity may be, the second step on the map is impossible to miss: “I just want to learn their names.”

Once this threshold in the ARMY journey is crossed, there’s no turning back. The danger here is that in learning the names of these seven sweet and silly young men, their personalities, quirks, and individual friendships start to become clear and distinguishable. Starting to identify the members and perhaps even picking a “bias,” the fandom slang term for favorite member, opens up a whole new world to explore.

Stan culture is dependent on content, and the strongest fandoms are often those that feel like they have a true two-way relationship with the artists they idolize. The members of the group have actively used Twitter since their debut, sharing updates about their days, teasing one another, and making followers feel like they’re a part of their inside jokes. It’s easy to get pulled into their orbit because of the sheer abundance of content: their catalogue includes a weekly variety show focused on tossing the boys into silly and often competitive situations, which has now amassed a backlog of over 100 episodes to work through. When not working or touring, their label has sent them to destinations around the world for a travel show called Bon Voyage (four seasons). They have multiple full-length movies following their tours. Not even quarantine and a global halt could stop them: in August, yet another reality show premiered that takes viewers into the time the band spent together safely in isolation out in the Korean wilderness. In a time when nothing feels safe or protected, it’s only natural that people would gravitate towards something that feels as immovable as this seemingly endless stream of consumable, whimsical content.

The idea of art as a source of escapism is nothing new. After the Great Depression came the Golden Age of Hollywood and the rise of Disney Animation, satisfying a general public seeking stories of goodness and glamor. The meteoric impact of the Marvel Cinematic Universe and newer iterations of the Star Wars saga speak to this cultural craving, transposed to the 21st century and a generation that have already experienced more “once in a lifetime” events than any before them. The allure of BTS is a microcosm of this same phenomenon in which trying times push consumers into the arms of films, art, stories, and creators that make them feel seen and understood.

In digging further into the unique celebrity of the members of the group, their reputation as a generous collection of young people is interesting to explore in tandem with the spotlight that has been cast on the general community of K-Pop fans this year. Renewed attention has appeared for the way that this general online collective disrupted racist hashtags and earned credit for President Trump’s half-empty Oklahoma rally. For BTS and their fans in particular, though, taking action for the better is nothing new.

BTS members have been known to donate to causes they care about, preferring to keep donations private unless otherwise specified. This year it was revealed that Jin, the oldest member of the group, had been quietly donating to UNICEF for years. Group leader RM created a fund at a school in the group’s home city of Seoul specifically for music education for hearing-impaired students. Dance leader J-Hope created a dance scholarship for young girls hailing from low-income backgrounds. When the group’s 1 million USD donation to Black Lives Matter was revealed, the BTS ARMY launched the Match a Million campaign and did just that in a matter of days. The phrase “I stan the right group” may not have originated with BTS, but it’s hard to imagine a place where it feels more appropriate. (Recently, a friend delighted me with the perfect text message: “BTS actually stands for Boys to Stan.”)

Perhaps the best news for fans old and new is that BTS show no signs of stopping on their continuing journey to world domination, especially in light of the earth-shaking, record-shattering “Dynamite” drop. If their razor-sharp choreography doesn’t get you, maybe the compilations of their sweet friendships will; if the antics on their many shows and movies don’t capture your heart, perhaps their commitment to philanthropy and desire to truly make the world a better place will be what does it. Whatever the entry into the fandom may be, Jimin’s words from the group’s collective graduation address to the class of 2020 ring true: “Remember there is a person here in Korea, in the city of Seoul, who understands you.” Same, Jimin. Same.