Elvis Costello Performs “Hey Clockface / How Can You Face Me” with Jon Batiste on Colbert: Watch 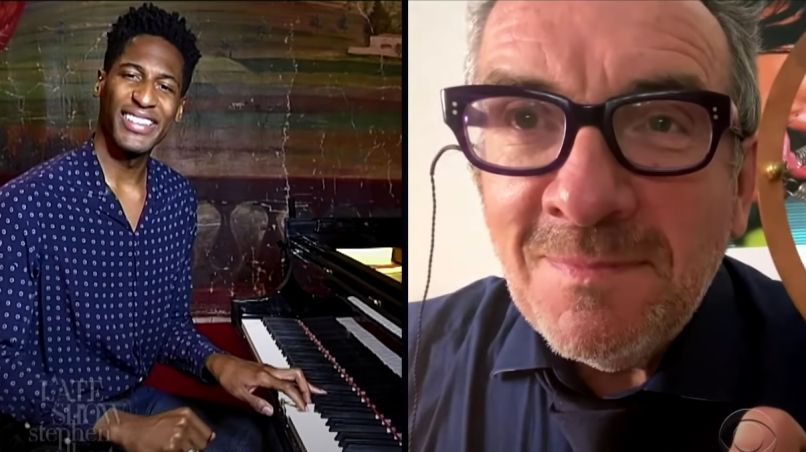 After months of anticipation, Elvis Costello will finally release his 31st studio album, Hey Clockface, tomorrow (October 30th). To promote the effort, the legendary musician appeared on Colbert Wednesday night to perform “Hey Clockface / How Can You Face Me” alongside A Late Show bandleader Jon Batiste.

Holding his spring suspension microphone perhaps a little too close to his computer camera, Costello delivered what felt like a very old-timey performance despite all the technology involved. Batiste, as he always does, gamely played along at his piano, smiling the whole time.

The pair also dusted off “Party Girl”, from Costello’s 1979 album Armed Forces, for a Play at Home online exclusive. Check out both performances below.

Prior to playing his songs, Costello Zoomed in with Stephen Colbert for an interview. They discussed all things COVID, Clockface, and the recently announced Armed Forces box set. Asked which of his own tracks would be fitting for a Trump rally, Costello read the lyrics to one he wrote for a new musical based on the 1957 film A Face in the Crowd. (The play was supposed to debut earlier this year, but we all know why that hasn’t happened.) Noting the song is meant to be sung by “a lying, cheating, swindling hillbilly singer who rises through the realms of entertainment to be a man of influence,” he recited,

“When the bailiffs are at the door and you want to vent your spleen/ Vaseline my pompadour, I’m twice the man you should’ve been/ Hand ’round the ammunition and the gasoline/ Just say blood and hot sauce/ For the people will not judge me, because there’s only one [God] damn/ And you know how much they love me, because I’m one of them.”

Hear the rest of Costello’s words and the full interview ahead.