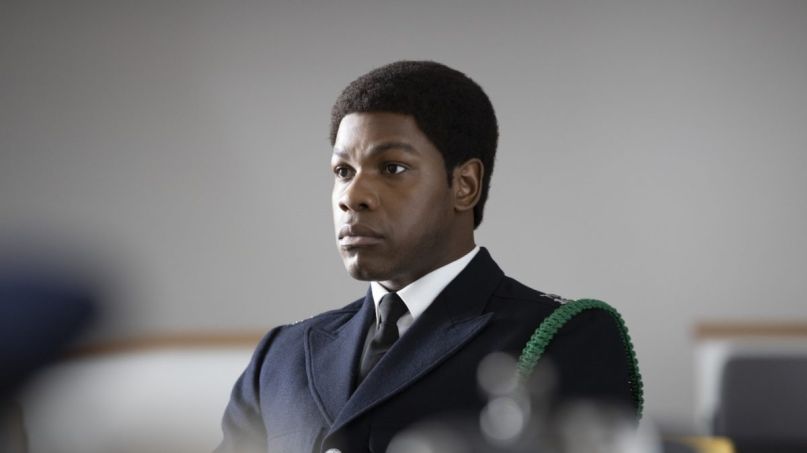 The Pitch: Continuing his probing look at the lives of the West Indian immigrant communities of 1960s-1980s London, Steve McQueen concludes his Small Axe anthology with the real-life tale of Leroy Logan (John Boyega), who’d eventually become one of the Metropolitan Police’s most decorated superintendants. Before he got there, though, he was a young research scientist who decides to fulfill his lifelong dream of becoming a police officer — much to the chagrin of his father Kenneth (Steve Toussaint), a proud Jamaican who’s experienced the racism and brutality of the British bobbies firsthand.

As a young recruit, Leroy excels; he’s top of his class, physically fit, and immensely principled. But the minute he straps on the policeman’s cap and starts his official duties, the challenges of being a Black man in law enforcement make themselves abundantly clear. He’s ignored and distrusted by his white colleagues, from whispered comments in the cafeteria to unexplained rejections on advancement exams. His own community even calls him a traitor. Pressures build even further, and soon Leroy has to figure out whether he has any chance of changing the system from within.

The Police Are the Public, and the Public Are the Police: 2020 (and lazy. albeit well-meaning, culture writers) has all but ruined the word ‘timely’: what does that word even mean when a) this year’s been an ever-growing onslaught of bad news, violence, and pandemics on all fronts, and b) issues of police brutality and the rotten core of corruption that sits at the heart of law enforcement have existed long before George Floyd, before Trayvon Martin, before Black Lives Matter? And yet, Red, White and Blue has the liberating, difficult aroma of timeliness to it, especially amid renewed discussions of the failings of the police as an institution, and whether it’s worth (or even capable of) reforming.

By and large, Black police officers carry a solemn duty and a terrible burden: they sign up to serve their communities and fix police culture from the inside, and often end up swallowed by the ‘thin blue code of silence’ they hoped to avoid. With Leroy, we see that scenario play out with excruciating, liberating clarity, Boyega bringing a maturity and gravitas his newfound blockbuster career could never afford him.

As with so many tales of Black excellence, Leroy can’t just be good — he has to be the best in order to get his foot in the door. Every interaction is super-charged with a blend of tenderness and tension, whether it’s the relief of finding the one nice white cop during training (he listens to Marvin Gaye!) or the slow, excruciating reveal of exactly what word his fellow officers scrawled on his locker. Through it all, Leroy has to maintain a stiff upper lip — this is what he signed up to change. However, even he has limits, especially when their prejudices put him directly in harm’s way. “Sometimes in life, it’s better to just blend in,” a supervisor warns him — a telling remark that crystallizes the true threat he symbolizes to London’s insular, authoritarian police culture.

Boyega’s never been better, honestly; there were glimmers of this kind of conflict in his role as security guard Melvin Desmukes in Kathryn Bigelow’s flawed Detroit, but Leroy’s the perfect vessel for Boyega’s uncanny mix of intensity and empathy. As our own Robert Daniels pointed out for Polygon, Boyega (a star now freed from the PR-friendly cloak of The House of Mouse to engage in Black Lives Matter protests) is “what Finn could have been: a hero acutely translating his anger, and the era’s unfettered outrage, into actionable support for those suffering most, no matter the comfortability of those around him.” In this way, he and Leroy are kindred spirits, and it’s impossible to imagine a more fitting match to the material.

I Am the Only Authority: As much as Red, White and Blue is a tale about race and policing, it’s a tale of Black fatherhood as well. Toussaint’s Kenneth is practically second lead, a proud man quick to anger who sees his son’s choice to enter the force as a betrayal. A quick prologue in the film’s opening minutes sees him talking down a pair of police officers who accost Leroy as a child; “don’t be no roughneck,” he warns him.

In fact, the very thing that motivates Leroy to join the force is his father being beaten by the police for a perceived traffic violation, an event that nonetheless widens the rift between them. Toussaint’s just as remarkable as Boyega here, switching between righteous indignation and fatherly concern with the tilt of a head or curl of his lip. And the two of them close out the film with a heart-to-heart that rivals Call Me By Your Name‘s for thunderous power.

Surrounding them, of course, is the crisp, period-appropriate atmosphere that’s marked all of the other Small Axes to date, DP Shabier Kirchner once again crafting ambitious, visceral compositions with highly-saturated 35mm footage that hones in on gestures both big and small. Words strategically played on a Scrabble board are filmed with the same textured impact as a late-film one-take foot chase through a factory; it’s riveting stuff.

This time, McQueen imbues the series’ knack for groovy needle-drops to more melancholy purpose — Al Green’s “How Can You Mend a Broken Heart?” becomes a ballad not just for Leory’s tensions with his father, but the irrevocable gulf between police and oppressed Black communities. Tonally, McQueen and co-writer Courttia Newland’s screenplay flits capably between character study, issue film, and cop drama so seamlessly you’ll barely notice it’s changed gears, and at eighty minutes there’s not an ounce of fat on it.

Big Change Is a Slow-turning Wheel: Most intriguingly, Red, White and Blue doesn’t come with easy answers to the issue of police brutality and systemic oppression against Black people in law enforcement. No, there’s no sugarcoating the deep, systemic problems with the overwhelmingly white police force, who treat Leroy with a mixture of patronizing adoration and full-throated hatred. But McQueen maturely wrestles with Leroy’s growing anxieties about whether his work is worth the abuse, and the film doesn’t come away with the clean ‘all cops are bastards, defund the police’ moral line many of us have largely landed on in 2020.

The Verdict: With this, Mangrove, and Lovers Rock, McQueen’s three-for-three on creating involving portraits of a very specific subset of Black life, making its issues feel universal to the experiences of Black people on both sides of the pond. After the wet blanket of Finn’s unrealized potential as a character, Boyega finally has the star-making turn he’s been waiting for: a chance to put his considerable charisma and physicality to good use, and a script worthy of his talents.

We’ll have to wait and see what the other two Small Axe films look like, but McQueen’s experiment is quickly approaching Three Colors levels of unstoppable quality and cinematic import.