The Craft: Legacy Is an Uneven Love Letter to the Weirdos: Review

The Blumhouse sequel is magical, but the spell wears off quickly 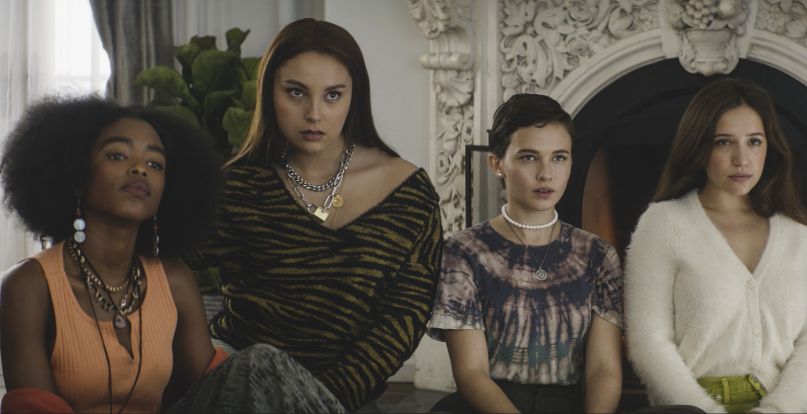 The Pitch: Writer and and director Zoe Lister-Jones returns with the long-awaited sequel to 1996’s The Craft. Similar to its predecessor, this story follows three teen witches looking for a fourth to complete their circle. Enter new girl in town, Lily (Cailee Spaeny), whose mother (Michelle Monaghan) has just moved in with her new boyfriend (David Duchovny) and his three teenage sons. What begins as a coming-of-age tale eventually transforms into a mystery with ill-defined stakes.

When Witches Go Riding: The Craft has a complicated legacy to reckon with seeing how it not only inspired a generation of girls to explore the occult, but also provided important representation in the casting of Rachel True as Rochelle. In more recent years, however, the film has been re-evaluated for its questionable depiction of female friendships and the implied fear of feminine power. What’s more, the adorementioned inclusive casting — once regarded as a milestone in diverse representation — has been marred by the subsequent erasure of True and her character Rochelle in marketing and convention appearances.

Not surprisingly, Lister-Jones attempts to rectify all of that by depicting these new witches as compassionate young women, tempted by immature desires, but wise enough to recognize when they’re flying too close to the sun. It’s a wise pivot that showcases how exceptional power and diversity are not to be feared, but rather what makes us strong. Looking back, it’s a total 180 on the implied readings of the original film’s themes.

Representation is strong, too. A trans character lives her life mostly unaffected by identity, which is a refreshing change from a narrative so often framed around trauma, while a bisexual character adds some depth and nuance to the proceedings. Although their arcs are later relegated to the sidelines to focus on the larger, ensuing plot, these characters do feel loved by the filmmaker as opposed to being tossed in for tokenism’s sake.

I Put a Spell on You: Another inspired amendment is the film’s beautiful depiction of witchcraft. Lister-Jones consulted with Waking the Witch author/The Witch Wave host Pam Grossman, and her insight has warranted an empowering depiction of both magic and the unifying nature of the coven itself. Spaeny’s Lily joins Tabby (Lovie Simone), Lourdes (Zoey Luna), and Frankie (Gideon Adlon) in a supportive community that never leans into stereotypes. The rituals and adornments feel authentic, as does the sense of playfulness that would accompany teenage girls exploring new powers. The only gripe is the execution of the effects, namely the overuse of colorful CGI that gives the magic a fairly juvenile wash and winds up diminishing the spells. One example is the way the girls freeze time, which feels like something pulled right out of a ’90s sitcom.

Double, Double, Toil and Trouble: Ultimately, the film unravels when it attempts to explore its characters. We’re told that Lily is different, but other than her quirky-cute haircut, and the fact that she says she has no friends, we never really find out why. Nicholas Galitzine steals every scene as Timmy, deftly navigating a range of emotions and motivations, only to be thrown aside for the final act. Monaghan is underused and given very little, as is her one-note boyfriend in Duchovny. As Adam, Duchovny plays a men’s motivational speaker with toxic, controlling beliefs. What starts as an intriguing representation of masculinity boils down to a murky villain with a confusing resolution. Again and again, characters are given detours or derailed altogether.

The Verdict: So much of the film’s connective tissue to the original feels forced and contrived, making you wonder if it would have been better served as a straight-up remake — or even a Netflix series. Alas, Blumhouse opted for a stand-alone sequel, which begs the question: “Who is this movie for?” Simply put, Legacy is for anyone who has ever felt ostracized or marginalized or wished for authentic representation in films. While it may have been written with teen girls in mind, this film is “for” everyone and could lend valuable empathy to those who do not see themselves represented in the story.

Because of this, Legacy wears its heart on its sleeve and you can feel the love for the source material. There’s an endearing and timely focus on building community, which is foundational to real witchcraft, and the message that our differences are what make us strong is one worth repeating at every opportunity. Unfortunately, there are key ingredients missing in the cauldron, and the film feels stilted by its narrative arc. Ideally, we would have had the opportunity to see the complex character dynamics established in the first half play out, but what we get is mostly just a glimmer.

Where’s It Streaming? The Craft: Legacy is currently available via Amazon Prime Video.