The Wolf of Snow Hollow Adds Coen-Style Humor to the Werewolf Genre: Beyond Fest Review 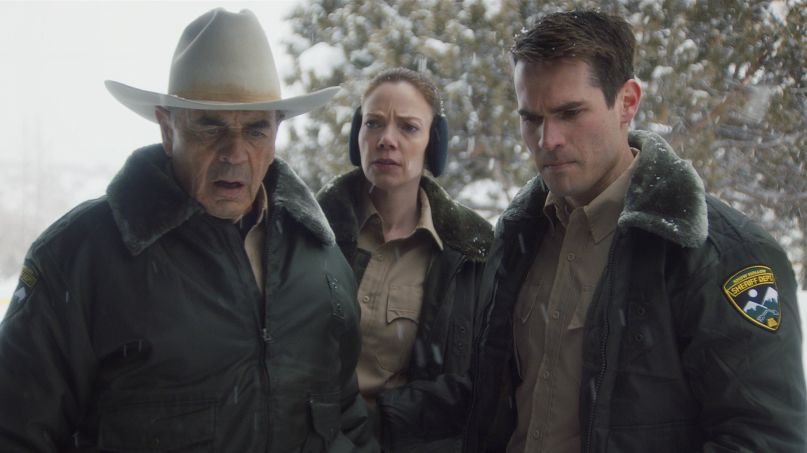 The Pitch: In a small and snow-covered mountain town, a series of murders suddenly create a sizable body count, leaving the townsfolk frightened and the humble police force confused. When a rumor runs through town that a werewolf is behind the kills, coinciding with full moons and savagely torn apart corpses, John Marshall (Jim Cummings) is suddenly tasked with proving that lycanthropes are a campfire tale. This proves difficult when it’s added to his long list of pre-existing duties, such as taking care of his teenage daughter and watching over his sickly father.

It’s Like Fargo With Werewolves: Jim Cummings is a jack-of-all-trades when it comes to film. No, seriously, the guy has dipped his toes into everything. Writing, directing, acting, editing, cinematography, hell, he even has a camera department and soundtrack credit to his name. After a string of shorts and television episodes, he started working on features, and even though he’s acted in a handful of genre films, The Wolf of Snow Hollow marks his first foray behind the camera in the horror medium. What we get is a darkly funny murder mystery that is smattered with gory kill scenes and visceral werewolf violence.

Whether he meant to or not, Cummings (who triple threats here as a writer, director and star) taps into the Coen brothers by offering bouts of off-beat humor that come shaded with grisly slayings and enough blood to satiate gore hounds. The film dances purposely on this line between comedy and murder, and editors Patrick Nelson Barnes and R. Brett Thomas work wonders to seamlessly blend the two together with wondrous transitions and cuts. Whenever excessive amounts of viscera appear, you’ll know you aren’t too far out from stifled laugh or audible chuckle.

Cummings Doesn’t Quite Join the Pack: Snow Hollow is really close to greatness. Cummings acts his heart out as Marshall, one of the deputies who is constantly being undermined by both his daughter Jenna (Chloe East) and his father, who also happens to be the Sheriff (Robert Forster). In his final role, the late Forster brings his rough and tumble charm to his underutilized presence, which seems to be a big theme throughout: underutilization.

Although Cummings is a more than capable actor, we’re often shown glimpses of so many other roles that slide away in the periphery. Forster is mostly ushered off screen, despite being magnetic in every appearance; the multi-talented Riki Lindhome is never really given any spotlight; and even East, who anchors the movie with themes about fatherhood and small town blues, tends to come and go too quickly.

Snow Hollow also never quite decides what it wants to be. There are some heavy, dramatic elements — Marshall is an alcoholic who is a noticeably bad father, for instance — but they tend to all land clumsily in the end. Hints at takes on misogyny and toxic masculinity also pervade the film, but are never dwelled upon. Most, if not all, of these tonal inconsistencies wind up preventing the film from firmly planting itself as a must-see.

The Verdict: Cummings has a solid horror debut with Snow Hollow. While its monster scenes are as refreshingly fun as The Howling and the setting seems perfectly apt alongside Twin Peaks, the film can’t quite make itself live up to the reputation of either property. Gripes aside, Snow Hollow is a fun variation on the werewolf film that gets by with enough chuckles and blood.

Where’s It Streaming? The werewolves are howling now on Video On-Demand.