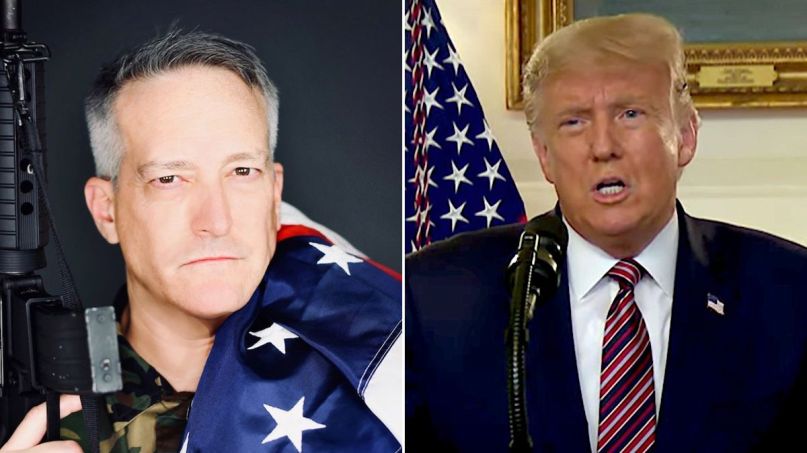 Filter mastermind Richard Patrick is on a political vendetta with the band’s upcoming album, Murica. As the frontman said himself, he’s targeting “Trump-supporting nutbags” with an incendiary video for the album’s title track.

Patrick has been outspokenly anti-Trump on social media, opinions that led to the cancellation of a Filter show in the state of Texas in 2019. In the video, the singer portrays his version of a radical right winger, and he pulls no punches.

“I just wanted to show this surreal, crazy side of what America looks like,” he told Alternative Press. “I literally am doing it just so the record shows that someone was willing to f**kin’ say something about the right. Something about how crazy they are.”

The gun wielding, Nazi saluting characters in the “Murica” video are caricatures of Trump’s most extreme supporters. As Patrick points out, their guns are pointed at the political opposition. In this case, that’s anyone not on the right.

“The character in the video is a Trump-supporting, gun-loving, unmedicated, super-freak ’merican unhinged and at his wits’ end,” explained Patrick. “And he’s trying to take control of something that is not out of control. And he’s afraid. He’s the super-afraid white male. The Trump-supporting nutbag that I hope I can reach.”

He added, “Who is the character aiming at at the end of the video? He’s aiming at anyone from the left and at anyone from the normal middle,” Patrick said. “The regular folks who make up the country that are pretty much normal and just want to raise their kids and stay COVID-19-free and try and make a living.”

As for his staunch political beliefs, Patricks said, “A lot of my fans are from the right, and they’re, like, ‘Man, I like ‘Hey Man, Nice Shot’. Why are you f**king talking about politics?’ Because it has to be done. Someone has to say it. … I don’t make music to try and get rich. I have built up my scoring career, and I can make money other ways other than just selling records. For me, Filter are my mouthpiece. I just wanted to make a video that was like what Ministry in 1988 might’ve done right now.”

As it is, Ministry have also been politically active around the election, launching a voting campaign along with a new video for their 2014 song “Git Up, Get Out ‘N Vote”.

Watch Filter’s video for “Murica” (discretion advised) below. As of now, no release date has been announced for the Murica album.