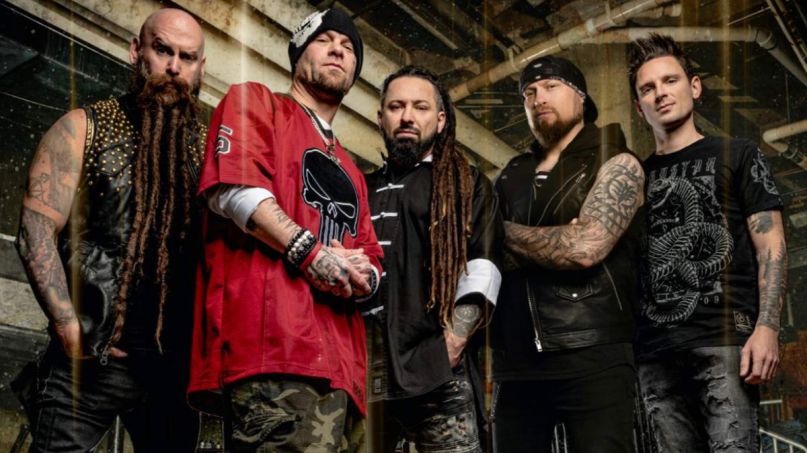 Five Finger Death Punch have released a music video for the single “Living the Dream” that is rife with political symbolism. One aspect of the video appears to take an anti-mask stance, although there’s some ambiguity in the band’s intentions.

In the video, civilians who wear masks are given a button that says “Compliant” emblazoned with a hammer and sickle (a longtime communist symbol). A sinister female leader who gives out the masks doesn’t have to wear one, as her button reads “Exempt”. There are also zombies hoarding toilet paper and Pulp Fiction-like gimps who are walked on a chain by the “Exempt” leader. The American flag is seen in the video with the stars replaced by the hammer and sickle, as well.

When a masked ice cream truck worker is spotted with an actual American flag, Mrs. “Exempt” loses it and unleashes her gimps, who cinematically destroy the ice cream truck. The video then cuts to a television news item on “The Great Awakening”, and climaxes with a number of unmasked patriotic Americans, the members of Five Finger Death Punch included, being mowed down with gunfire.

In the end, it turns out it’s all just the premonition of one of the Founding Fathers, who wakes from the dream right as he’s about to sign the U.S. Constitution.

Is it all a big right-wing metaphor? Outspoken Five Finger Death Punch guitarist Zoltan Bathory released a statement that doesn’t overtly say that the video is anti-mask, but his political opinion is thinly veiled:

“America is a beautiful idea that draws immigrants like myself from all over the world to the promised land of equality, life, liberty, and the pursuit of happiness. This idea is now under siege and certain events are starting to remind me of the things many of us came here to escape… It’s not a ‘left against right’ problem but an evolutionary problem. The growing pains of a civilization that without the necessary spiritual enlightenment, arrived a bit early to a level of technology where everyone is connected. The good news is that now everyone has a voice. The bad news is that now everyone has a voice.

So we are living in the manipulators’ paradise, where liars and hypocrites run unscathed, the news are just opinions, politics are a blood sport, and facts are determined by consensus instead of the truth. We as artists, however, have a unique opportunity to portray and ridicule the absurd to prevent it from becoming reality.”

The song “Living the Dream” is from FFDP’s most recent album, F8, which came out in February of this year. Earlier this week, Five Finger Death Punch officially parted ways with longtime guitarist Jason Hook, who has been replaced by British guitarist Andy James. Hook had to leave the band’s February tour early due to complications from a recent gallbladder surgery, and has now made his departure permanent.

“As far the reason I’m leaving… well, there really isn’t just one,” Hook said in a press release. “I’ve been in bands my entire life and I feel like I’ve done all the good that I can here. It’s time to pass the baton and move on to new challenges.”

Update: Guitarist Zoltan Bathory has issued a lengthy statement denying that there is an anti-mask message in the “Living the Dream” video:

“As much as some *news sites* used ‘anti-mask’ as a clickbait title (And I must applaud the capitalist in them or I myself would be a hypocrite) Let’s make this crystal clear: In a fictional story, Amongst shopping cart zombies, Tide Pod eating fat superheroes and all the other metaphors, why would anyone think the mask scene isn’t one.

The scene in question is not about the masks… it’s NOT an Anti-Mask message… in fact you can go to FiveFingerDeathPunch.com right now and buy some cool ones.

If I must explain this: The whole video is in the frame work of fiction, a dystopian nightmare of one of the founding fathers – right before he signs the constitution.

Just as I prefaced it: ‘We as artists, have a unique opportunity to portray and ridicule the absurd to prevent it from *becoming* reality.’

The mask segments are about hypocrisy on the highest level. When the rules are made for you but those who made them are exempt. Pretty much the standard in all dictatorships and totalitarian regimes (I had the displeasure of growing up in one) hence the reference.

I often say, ask us!!! The immigrants… the Cubans, the Venezuelans, the North Koreans, anyone from the former Soviet block… Talk to us and we will tell you …. WE were lucky, because we had a place to escape to. We are fortunate that we could come here…. but If America is gone, where will you go?

We immigrants also remember how our freedom slipped away, how our rights were ripped from us, how we were kept under the thumb and in fear of our own governments. So maybe, just maybe… we have valuable experience we can tell you about, we can forewarn you of the things we have seen before.

So We the people must do everything in our power to stay free as a society. We must prevent the rise of tyranny in all shapes and forms, we must resist the would be dictators and the totalitarian ideals. This is what the founding fathers worried about and tried to prevent by creating the constitution. Believe it. America is a miracle, and I LOVE this country… and I will never shut up about it.

Anyway – not anti mask – and If you reduced this entire video to that scene and missed the metaphor behind it … Well… the good news is – It is STILL America so you have the right to have and even print your own opinion.”

Watch the “Living the Dream” below and draw your own conclusions.