Foo Fighters Play First Show Since Pandemic at the Troubadour for #SOSFest: Watch 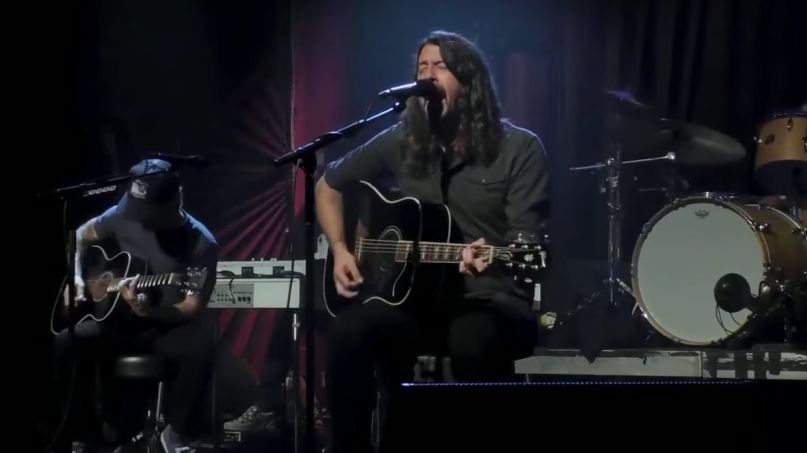 On Saturday, the members of Foo Fighters reunited for their first show together since the beginning the pandemic. As part of #SOSFest (Save Our Stages), a three-day digital festival benefiting independent music venues, Dave Grohl and co. delivered a five-song acoustic set from the Troubadour in Los Angeles.

Grohl, Taylor Hawkins, Pat Smear, Chris Shiflett, Nate Mendel, and Rami Jaffee stuck to their greatest hits, playing songs like “Skin and Bones”, “My Hero”, and “These Days”. The performance then concluded with a pair of Grohl solo performances, as he crooned his way through “Times Like These” and “Everlong”.

In between songs, Foo Fighters reminisced about their personal history with the Troubadour over the years. Grohl recalled playing the venue with his pre-Nirvana band Scream, while Smear remembered seeing The Go-Go’s perform and getting into a fight with Tom Waits (no, really).

“These memories and these experiences that we had here were life-changing and formative experiences that inspired us to play music,” Grohl said prior to closing the show with “Everlong”. “I can only imagine there are millions and millions of other people just like us that have done the same and it’s made their lives a better place. So it’s crucial that we do everything we can to make sure these venues survive in order to be there to inspire the next generation of musicians to go on and do beautiful things with their lives, like make music.”

Watch the full performance below. Proceeds from #SOSFest are being given to independent music venues impacted by the pandemic.

To preview their appearance at #SOSFest, Foo Fighters performed an acoustic version of “Learn to Fly” on Jimmy Kimmel Live on Thursday.

Setlist:
Skin and Bones
My Hero
These Days
Times Like These
Everlong