Guns N’ Roses Unveil “Not in This Lifetime” Pinball Machines

The new pinball machines were co-designed by Slash 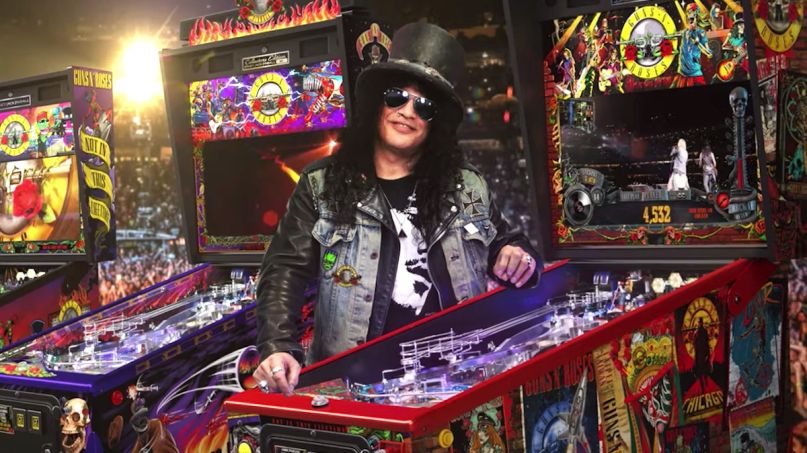 The post-pandemic arcade might not be the same crowded sweatbox we remember, but there will soon be at least one bright new toy for the ardent pinball fanatic. Make space in your rec room, ’cause Guns N’ Roses have announced “Not in This Lifetime” Pinball, a collaboration with Jersey Jack Pinball.

The machine, available in three editions, is named after the band’s long-running reunion tour, and it’s a sight to behold. Guns N’ Roses’ iconography makes for excellent pinball graphics, with skeleton versions of the band adorning the colorful machine.

GN’R guitarist Slash is an avid pinball collector and longtime player, so the collaboration with Jersey Jack, a leader in U.S. pinball manufacturing, makes sense. In fact, it’s a wonder it took so long, with other notable heavy bands like Metallica, KISS, and AC/DC already having machines.

Slash co-designed the machine with Eric Meunier, who is considered a master in pinball circles for his work on the best-selling Pirates of the Caribbean machine, also a staple of pinball arcades and pizza parlors. Slash added specific game plays and actions, recorded guitar riffs, music, voice, and video for the new game.

“It’s been a very fulfilling experience working with Jersey Jack on the new GNR ‘Not in This Lifetime’ pinball machine,” Slash said in a press release. “Jersey Jack pinball games are some of the most unique and beautiful pins ever made and I am honored to have been able to work with their brilliant team to design one of the most original and exciting rock ‘n’ roll pins ever produced.”

Added Meunier: “To have this type of design work and participation from the game’s namesake creating the actual pinball game, has never, ever, been done before in the industry.”

Needless to say, the “Not in This Lifetime” Pinball machine is a true spectacle. The cabinet touts hundreds of interactive LED lights, multiple LCD displays, and a 120-watt stereo system that blares 21 full-length studio master tracks by Guns N’ Roses.

The machines “Standard Edition” sells for $6,750 and are available via Jersey Jack Pinball. A “Limited Edition” version retails for $9,500, while a “Collectors Edition”, featuring a signature card signed by Slash, Axl Roses, and Duff McKagan, goes for $12,500. Watch a trailer for the game and check out close ups of the machine below.