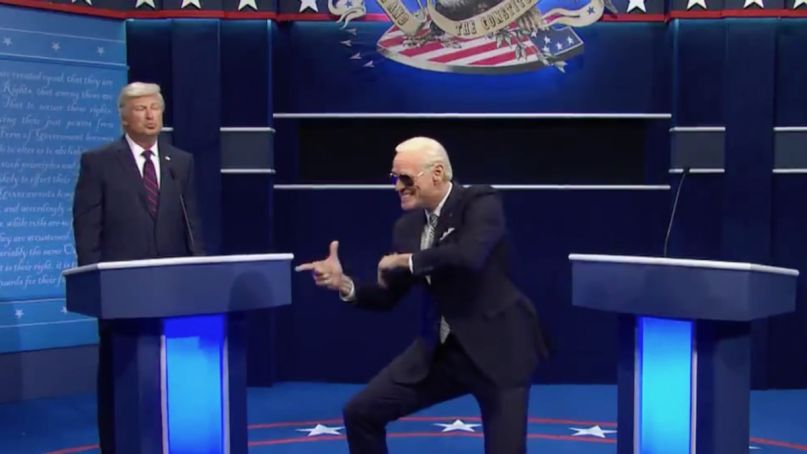 Saturday Night Live kicked off its 46th season with a cold opening parodying this week’s presidential debate between Donald Trump and Joe Biden, with Jim Carrey making his debut as the former vice president.

Appropriately, the cold opening began by acknowledging that Tuesday’s debate feels like “it was already one  hundred days ago” (in the time since then, Trump has been hospitalized for coronavirus.) Even so, “We thought it was important to see it again since it might be the only presidential debate, and it was pretty fun to watch — as long as you don’t live in America” the narrator explained.

Carrey walked on stage wearing Biden’s signature aviator glasses and with fingers guns a-blazin’. He then pulled out a tape measure to check distance between the two candidates’ podiums. “You did take the COVID test you promised you’d take in advance,” asked moderator Chris Wallace (played by Beck Bennett). “Absolutely, scout’s honor,” responded Trump (who is *still* being portrayed by Alec Baldwin).

In an interview with The New York Times ahead of this season’s premiere, SNL creator Lorne Michaels revealed that it was actually Carrey who reached out to him about playing Biden. “First of all, Jim is brilliant, and he cares deeply about the country and what’s going on,” Michael noted. “He wants to have a voice in this. Every time he’s done [SNL], he’s always come through brilliantly, and I think what he will bring to this part will be stunning and possibly transcend comedy. Because we’re in a period where comedy is only part of it.”