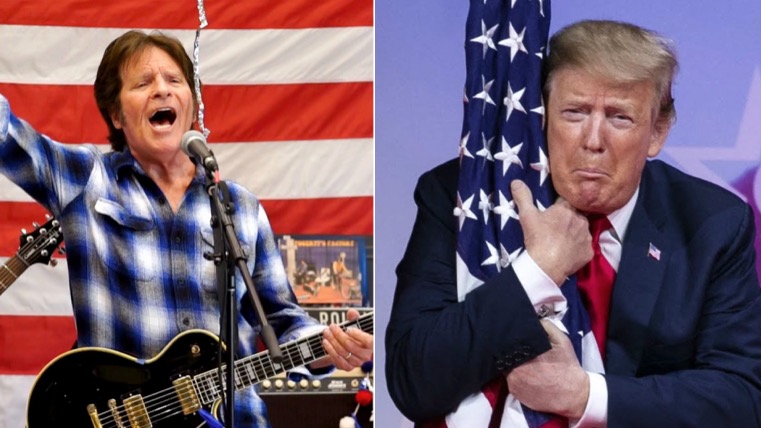 Donald Trump is not the introspective type, and so he has no qualms about playing “Fortunate Son” at campaign rallies without permission. The CCR classic was written by a US Army veteran about children of privilege who found ways — for example, lying about bone spurs — to avoid the draft lottery during the Vietnam War. But even if Trump can’t comprehend the irony, that songwriter has had enough. John Fogerty has issued a “cease and desist” order, tweeting, “He is using my words and my voice to portray a message that I do not endorse.”

Fogerty posted his statement along with a picture of himself in uniform. He said “Fortunate Song” came about “because, as a veteran, I was disgusted that some people were allowed to be excluded from serving our country because they had access to political and financial privilege. I also wrote about wealthy people not paying their fair share of taxes. Mr. Trump is a prime example of both of these issues.”

But lest you think Fogerty’s feelings only stem from the draft-dodging of the past, he enumerated his many issues with the Trump of the present. “The fact that Mr. Trump also fans the flames of hatred, racism, and fear while rewriting ancient history, is even more reason to be troubled by his use of my song.”

This is far from the first time an artist has escalated to a “cease and desist” order against the copyright-flouting Trump. Just on Wednesday, Phil Collins hit him with the the C&D after he played “In the Air Tonight” during a rally. It’s unclear if any legal body has the power or willingness to enforce. But dozens of artists have complained about Trump’s unwillingness to follow licensing laws, including The Animals’ Eric Burdon, Leonard Cohen estate. The Rolling Stones, and Neil Young.