Kanye West Prefers the Star Wars Prequels to the Sequels 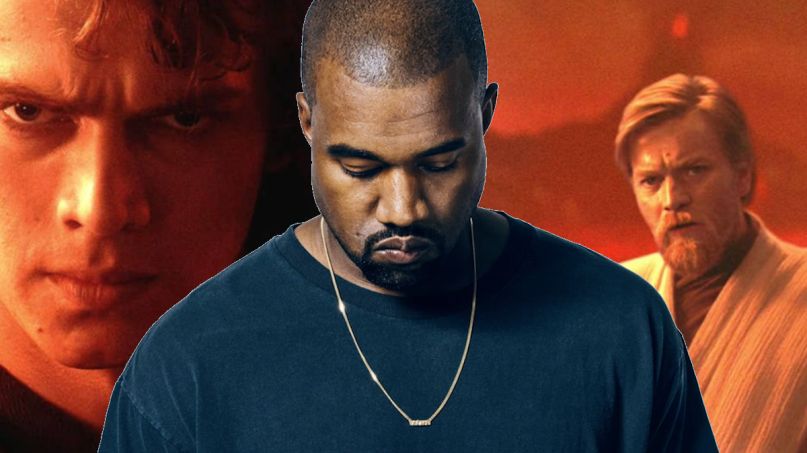 Kanye West prefers the Star Wars prequels over the sequels

It’s not easy listening to Kanye West these days. So, you could imagine our surprise when we found ourselves nodding in approval as he discussed, of all things, the Star Wars franchise during a recent appearance on the Joe Rogan Experience.

“They said that George Lucas’ prequels are worse than the corporate-made Disney Star Wars,” West digressed. “Like, Revenge of the Sith? We saw how Darth Vader was made! Like, I watched that, like, 10 times during COVID.” He then went on to quote Obi-Wan Kenobi in that film’s climactic battle: “‘Don’t jump Anakin, I’ve got the high ground!’”

Naturally, West pivoted to Disney’s recent run of sequels and spinoffs that have all proven polarizing, semi-arguing: “I’m saying even the prequels are better than anything that … And I’m sorry Disney Star Wars design team… No man, this is George. This is his baby. That thing was set in his heart to show us as children the Hero’s Journey…”

Five years ago, West’s comments would likely have elicited a number of scoffs from the Star Wars community. Today? It’s tough to tell. After all, the toxicity surrounding this franchise is so foul that it’s nearly impossible to decipher what is even a hot take anymore. (Personally, this writer still feels like he’s on an island for loving 2018’s cruelly ignored Solo.)

What West probably could have mentioned — looking beyond the authenticity of Lucas’ involvement — is that the prequel trilogy is far more original than the sequels. Sure, the political mumbo jumbo is both daunting and exhausting, but the prequels’ stories, battles, and planets all speak to a singularity that the Abrams-set trilogy fails to capture.

Fortunately for West and every other Star Wars fan out there, The Mandalorian returns to Disney+ for its second season this Friday, October 30th. Blame it on the purity and innocence of Baby Yoda, but the arguments are rarely as vitriolic surrounding that series. Then again, who knows with this franchise — the fan base is as vile as Mos Eisley.

We all must be cautious.

The most important thing Mr. West said today in his interview with Joe Rogan: pic.twitter.com/DnA1jGLGC0