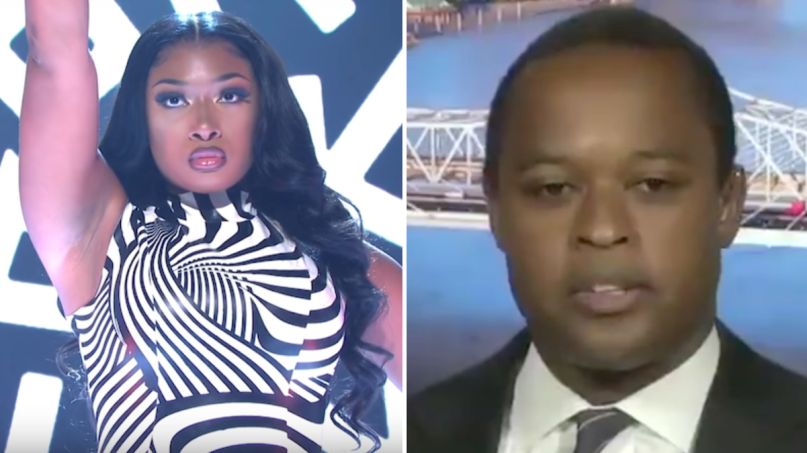 Over the weekend, Megan Thee Stallion used her Saturday Night Live appearance to make a savage statement about the Breonna Taylor case. In the middle of her “Savage” performance, she cut to audio of activist Tamika Mallory calling Kentucky Attorney General Daniel Cameron “no different than the sellout negroes that sold our people into slavery.” Now, Cameron has responded, labeling the rapper’s remarks as “disgusting.”

Appearing on Fox & Friends (which already says a lot about what to expect), Cameron said he agreed with Megan’s call to “protect Black women.” He continued, “but the fact that someone would get on national television and make disparaging comments about me because I’m simply trying to do my job is disgusting,” Never mind that Cameron has been heavily criticized for not doing his job in the Taylor case, wherein he reportedly never even asked the grand jury to consider homicide charges against the officers involved.

Cameron went on, saying he’s used to receiving backlash because he’s a “Black Republican” who “stands up for truth and justice as opposed to giving into a mob mentality.” He also toed the tired line of the “intolerant” tolerant left:

“The fact that a celebrity that I’ve never met before wants to make those sorts of statements — they don’t hurt me, but what it does, it exposes the type of intolerance that people… and the hypocrisy. Because obviously people preach about being tolerant. You’ve seen a lot of that from the left about being tolerant. But what you saw there is inconsistent with tolerance. In fact, it’s her espousing intolerance.”

Nah, Megan’s just calling ’em like she sees ’em. As a reminder, the only charges Daniel filed in the Breonna Taylor case, in which three officers shot and killed the unarmed woman while serving a now-banned no-knock warrant, were for the bullets that missed.

Watch Cameron’s comments below, followed by a replay of Megan Thee Stallion’s “Savage” performance on SNL.