The Detroit rocker was a guest of Donald Trump's

by Jon Hadusek and Ben Kaye 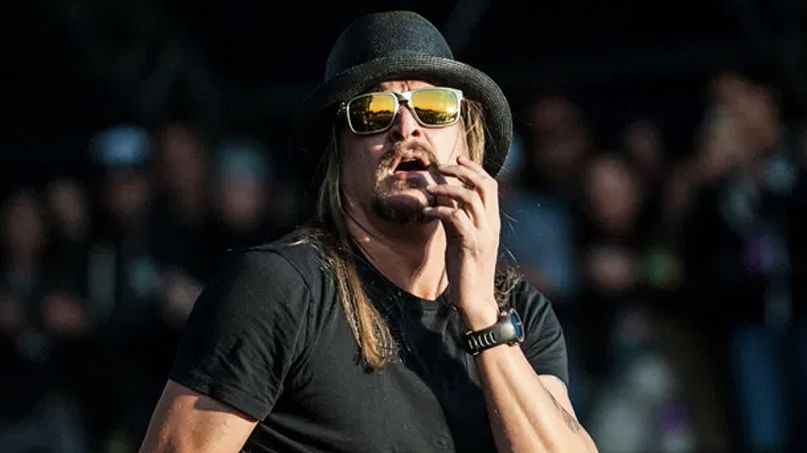 Joe Biden might have the Avengers in his corner, but Trump is fighting back with… Kid Rock. The Detroit rocker has been seen everywhere, from joining Trump on the golf course to playing at his rallies. He was also in attendance at Thursday night’s debate at Nashville’s Belmont University — where he, unsurprisingly, had to be compelled to wear a mask.

Rock was seated near eccentric PGA golfer/fellow Trump supporter John Daly, and they both seemed to think they could just plop down without masks. As face covers were required at the indoor event, a member of the Debate Commission eventually confronted the pair and provided them with masks to put on.

As shared by Entertainment Weekly, a priceless picture (seen in the tweet below) captures Rock and Daly looking down in bewilderment at the masks — even though everyone else around them was already covered. The Daily Mail even has photos of a staffer standing by making sure the two followed the rules. They both wore their masks after that, though further pictures show them tucked under their noses, which is known to be an improper and unsafe practice.

Rock and Daly also made sure to pull them down completely for a non-socially distanced selfie. Posting the pic on Twitter, Daly wrote, “Beyond blessed to watch one of best @POTUS #Trump at #PresidentialDebate2020 #Debates2020 with my boy @KidRock TRUMP MTHA F**KAS.”

It’s par for the course for Daly, who is best known for his Happy Gilmore-style golfing tantrums. Oddly, both he and Kid Rock have tweeted urging their followers to mask up — though more recent actions speak louder than those words.

Last month, the Kid played a Trump rally in Michigan in front of a mostly maskless audience. In March, the singer refused to shutter his Nashville bar, Big Ass Honky Tonk, ignoring early urging from the city’s mayor. The bar did eventually shut down during a city-wide mandated lockdown, but promptly had its alcohol permit suspended once business was allowed to return. The establishment was serving beer at the bar instead of table service, a violation of Nashville’s Phase 2 reopening rules. In response, Kid Rock’s business partner called the local Nashville government “like, communist.”

Rock also chose to close a Detroit restaurant after backlash from his profane rant about Oprah Winfrey. In his ongoing tirade against daytime network talk show hosts, Rock also made lewd remarks about The View’s Joy Behar and was then removed as the Grand Marshal of the Nashville Christmas parade.

Check out pics of Kid Rock and John Daly figuring out how to wear face masks below.

U.S. professional golfer John Daly and musician Kid Rock are seen after being told to wear a face mask ahead of the final presidential debate at Belmont University.

Kid Rock is making an appearance at the debate tonight. Asked if he was supporting President Trump's re-election, he told @nbcnews his presence would do his speaking for him.⁠ ⁠ "I think being here says it all, right?" he said. "Happy to be invited.”⁠ ⁠ Follow live updates from the final presidential debate at the link in our bio.⁠ #Debates2020⁠ ⁠ 📷 Julio Cortez / @apnews

Both were asked by debate staff to put on masks… https://t.co/sS7qGMIlDw

Protect yourself and others by making a homemade cloth mask. Join the #MiMaskChallenge.https://t.co/uakPPbu7VG

Stay home. Stay safe. And if you must go out, wear a mask. https://t.co/KuFFjYwak5 pic.twitter.com/6htVxgYr2B